Inside the Belly of a Dragon soundtrack project

Inside The Belly of a Soundtrack from Wiggy (Ian Wiggins) on Vimeo.

INSIDE THE BELLY OF A SOUNDTRACK is a work-in-progress to fuse music cultures to create an original soundtrack for the film “Inside the Belly of a Dragon” by British co-directors/writers Ian Wiggins and Hugh W Brown.
The soundtrack project brings together the musicians of Kampot Traditional Music School for Orphans and Disabled lead by Uon Sambo as well as The Cambodian Space Project’s Julien Poulson on guitar and Rob O’Hara aka Mute Speaker mixing in electro sounds and samples.

We begin our work at KAMA house by assembling a team of local and international musicians and filmmakers who aim create a film score by performing live to a screening of Inside The Belly of a Dragon, responding to the essence of the moods and scenarios captured on screen as well as mood maestro Jitterbug Jackson (Hugh’s alter ego) an Irish clown, conducting the music ensemble.

More about the film:

Inside the Belly of a Dragon follows a remarkable voyage of discovery and recovery for the renowned Irish Clown, Hugh W Brown. Arriving in Cambodia broken hearted and disenchanted with life as a performer, the Clown embarks on a journey through this beautiful country and is slowly lifted from his gloom by the breathtaking landscapes and his various encounters with the local communities and the remarkable artists and individuals who live within them. His travels in search of a limestone mountain that locals describe as ‘The Dragon’, see this charming and unusual film culminate with footage of an incredible Concert held inside this mountain. A Concert that is a unique and heartwarming showcase of traditional and modern Cambodian and European Arts but also a reminder of the value and healing power that these Arts possess. Filmed entirely on location in the Kingdom of Cambodia by Ian A Wiggins and with a sumptuous soundtrack to compliment the wonder of the landscape and it’s people, this … Written by Hugh W. Brown 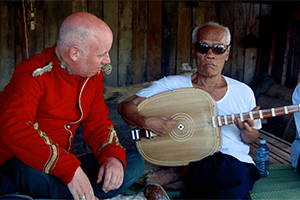