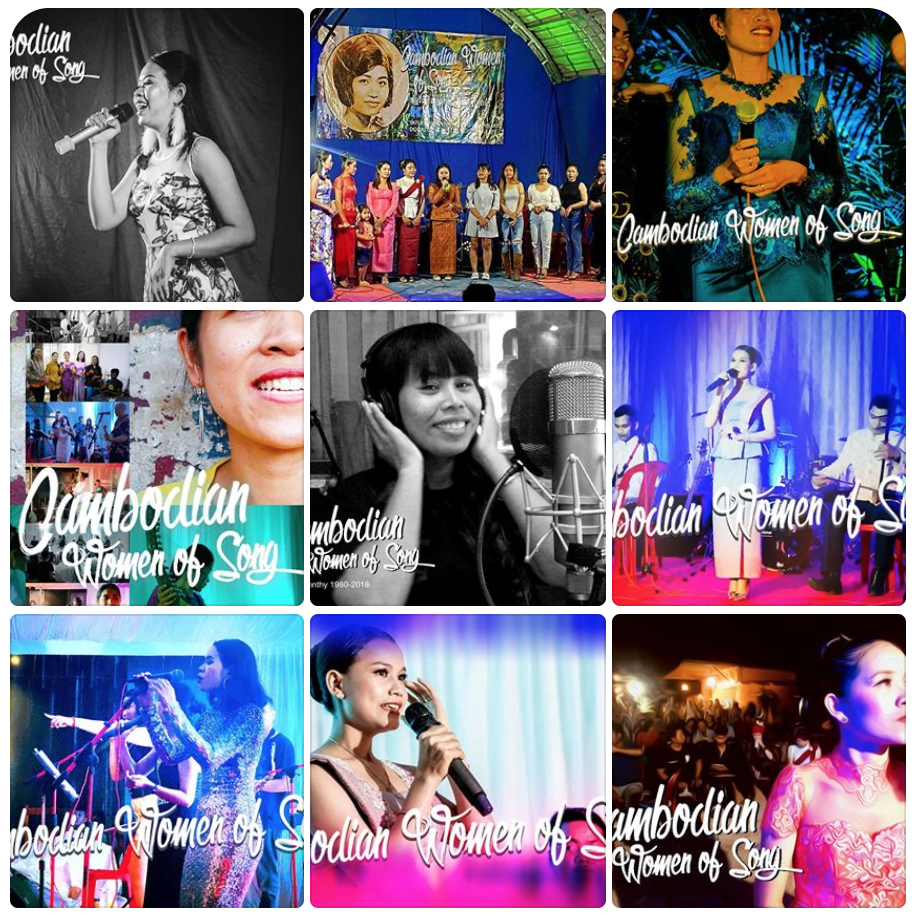 Over the last 12 months, things have been busy, and a lot of this – recording, live shows and the staging of several festivals in Cambodia – had already been in train. But as with any creative garden, new ideas have been flowering and flourishing and this has mostly been through the songwriting workshops that I’ve set-up with Sam Dara, who has been working with me to write Khmer lyrics and to demo new music ideas, some of the results of this has already found its way into the CSP live repertoire including the tracks Coming Home and If You Hear This Song Come Back to Me…

Sam Dara is completing her fourth-year of an arts degree at Royal University of Phnom Penh and has also been totally involved and inspired to bring together our fabulous tribute concerts Cambodian Women of Song. This is ongoing work and it’s also a way for me to meet and connect with talented up-and-coming musicians and to bring them to the stage with the CSP as ‘house band’. It’s a lot of work of course but we’re already starting to see some wonderful results and I’m only just coming up for air following the countryside presentation of Cambodian Women of Song out on Trey Koh (Fish Island) at the opening of our new venue Fish Island Community Arts Centre. CWoS is an ongoing tribute project to all of the great siren singers of Cambodia and will hopefully manifest into a book, a film, a digi/vinyl LP and of course, a live concert revue. Still, it’s early days yet so here’s a taste of the process behind bringing things to life.

Sochi’s contribution to Cambodian Women of Song is a surprise. I’ve known Sochi over the years as she’s long been an employee at popular Phnom Penh music venue Oscar’s Bar, however, I had no idea she was also a keen singer-songwriter until I met up with her again and as she’d got word that I was setting up a songwriting/demoing session in PP, she turned up and just started singing. At first, I wasn’t paying much attention to this exuberance but as you can hear in this track – Sochi’s first release “Lazy Husband Blues”, her songs are super catchy! instantly fun and likeable – just like the singer – so I was soon busy at work, writing and recording a whole LP’s worth of material that Sochi – who’d never recorded or performed before – seemed to have had stored up, just waiting for the right opportunity to come out! Needless to say, we’ll be hearing a lot more and thanks to her backers and supporters there’s already and excellent debut album ready to go!

Sochi’s debut is pretty inspiring! there’s been a lot of help in making this happen, Sam Dara coordinating and helping Sochi write down her ideas and lyrics, Jan Mueller recording the end mixes and Sochi’s Australian sponsors Douglas and Maureen providing a house to use for writing and rehearsing as well as funds for recording. In addition, many thanks must go to all who rallied together for this video clip, filmed by David Brown on an iPhone and shot quick and fast in just a couple of takes around a laneway we affectionally call ‘rat alley’. There’s a whole lot more to come as we finish more releases for Sochi and I hope these will inspire other up-and-comers to bring their ideas to life too.

Cambodian Space Project has always had a focus on working to include all sorts of people, not just those who are already successful or skilled in their areas but to include anyone who has the passion and enthusiasm to get on board the good ship CSP simply for the joy of it. It’s probably why the band began to morph more into a theatre group – producing work including Galaxy Khmer, Hanuman Spaceman, and Cosmic Cambodia – or perhaps better described as jungle cabaret, sometimes circus! but whatever it is, it’s something that we’ve brought all kinds of people together to create awesomeness through the magic of performance art, dance and music… and up until 2018, we were just getting going.

One of the most exciting works we’d created was Cosmic Cambodia (previously Hanuman Spaceman) – the story of brilliantly charismatic singer Srey Channthy, whose character is tired of selling pancakes in the village. … A story of escape, adventure, of dreaming big things, and most of all, celebrating life. In 2017, we began recording new music and some tracks intended for more music theatre – an immersive dance party based on themes from Pied Piper and tracks like 5 Lady Cows were leading the way for this new work. Since losing Channthy this work has been on hold and it’s something I’ve been re-thinking, also, re-working to respectfully carry on from where we’d left off. I’m pleased to see that news developments and partnerships are afoot and we’ll soon see some of the CSP’s “Rat Catcher” come to life in 2020. Stay tuned!

Developing ideas for music theatre show “The Rat Catcher” – on the closing night of Kampot Readers & Writers Festival, we jammed out an improvised set of music to close the Poetry Slam with Australian Poet Scotty Wings riffing on his version of the Pied Piper. Audience members and musicians were given rat masks to wear – to become real rats in a rat colony – while music and spoken word merged and blended in a taste of things to come! the next morning a bunch of local kids was spotted running around the place in the same rat masks left behind from the night before…

A new decade coming up! as we move into 2020 I’ll be taking a bit of pause to reflect on where everything began with the CSP and the almost ten years that I flew co-pilot with Kak Channthy. It was always clear to me that Channthy was a phenomenal performer – from each and every moment she stepped onto the stage, the show would rise up and become an exhilaration that was just remarkable to experience and more so, to have shared this with each other as we also navigated the ups and downs of getting (and keeping) the show on the road!

Lately, I’ve been approached by concert promoters who are keen to book CSP for future festival dates – great stuff! but until recently, I’ve been reluctant to call the band The Cambodian Space Project. I’ve felt it has to be the right time and occasion if and when we continue to venture out into the public arena, using a name (which at first Channthy didn’t know about) that I created as a totally collaborative artwork between Thy and myself, something we scripted ourselves into and threaded through our lives. I was caught by surprise the other day when someone asked if we were available for a festival date and asked: “who is your singer?” I replied, almost without thinking

“there are 3 singers, but Bong Sak’s (drummer) daughter is the main one… actually, there are many singers…”
Channthy’s legacy is now drawing all these Cambodian women to the stage with the CSP. Still early days, but it’s become something like the Buena Vista Social Club in the sense that it’s bringing a whole community to the stage, but instead of being elderly Cuban musicians, they’re young Cambodian women, aspiring singers, and musicians who are only just learning of their countries own remarkable music story… and are part of the next generation.

Meanwhile, back in Kampot… I’m spending time building a studio to work locally and to write and record with Cambodian Women of Song singers but also for collaborations with many visiting musicians. In addition, I’ll be putting a bit of time back into presenting and broadcasting my own radio show – something I love doing thanks to the encouragement and efforts of Kampot Radio – and I’ll be assembling series #4 of The Asian Garage Underground to share at length some of the wonderful music trip! we’re going on on the AGU, join AGU’s facebook group here.

Garage Fest! has been another important step… not just a great excuse to invite some friends and international guests into our own world – planet Cambodia – but to really put some thought and effort into building on Cambodia’s own astonishingly awesome history of sixties Garage Rock and to highlight this culture in a special three-day event to shine a light on all the great music coming up regionally and to showcase this in Cambodia! I mean heck! we’ve previously gone to much trouble and effort to take our music abroad, especially to showcase festivals such as Austin’s SXSW, so why not stay put and bring some of the goodness to us here in the Kingdom of Wonder and that’s what happened. Huge thanks again to all who jumped aboard and made this more than worthwhile, I’ll be working on staging Garage Fest again in 2020 and look forward to this annual hootenanny around mid-November. Here’s a bit more info featured in this Khmer Times story https://www.khmertimeskh.com/660078/garage-fest-cambodias-mini-sxsw-festival/