Channthy: What if you were still here? 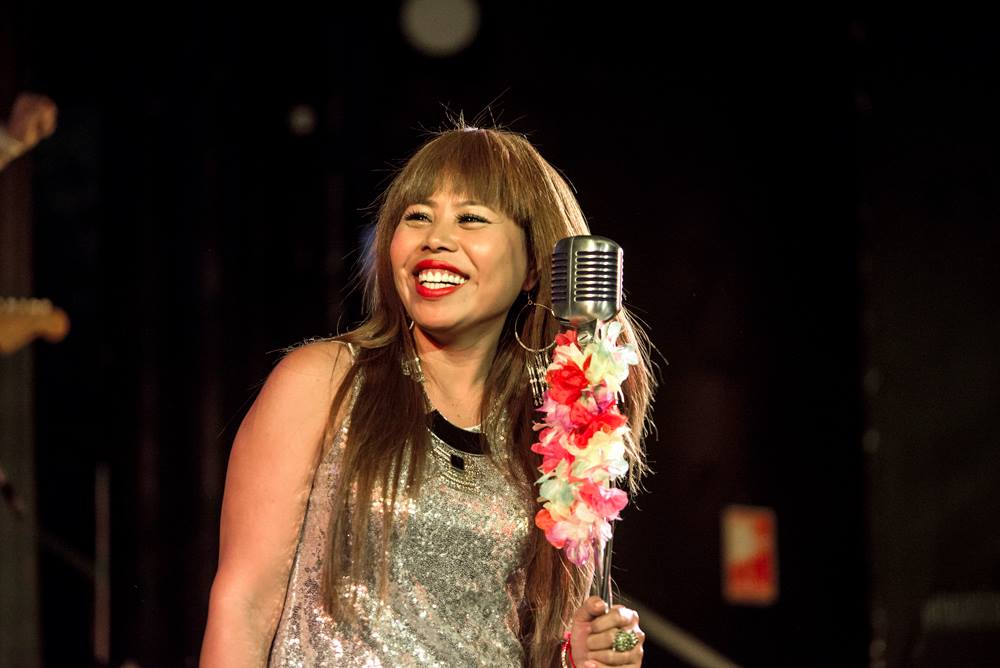 Day 17 of 100 days: writing on flying through Space and Time with Kak Channthy and The Cambodian Space Project 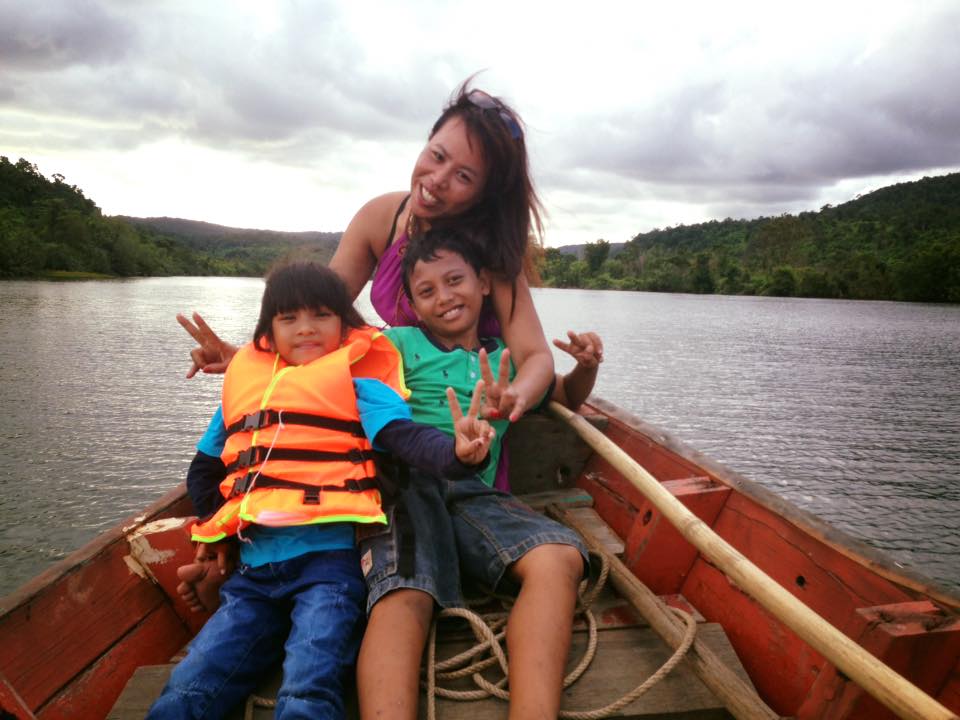 It’s just day 17 of my 100 days of writing on Channthy… I’ve never really kept a journal before so reflecting back on our lives together is already a challenge just to recall details like times and places and things that have already happened… some details feel blurred like a dream… already, as life races forward, Channthy feels like she’s further away from me today… a part of my life that is already fading from its immediacy and I feel sadder today because of it. 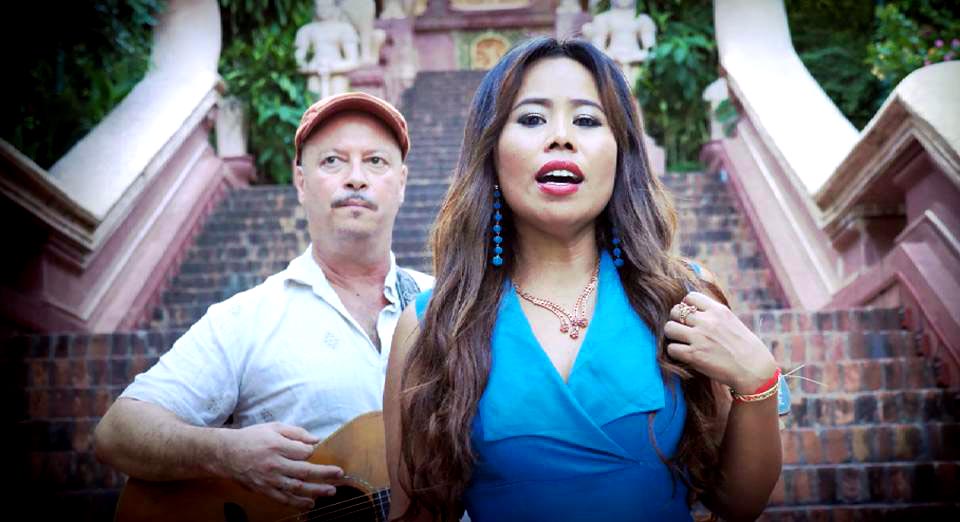 I’m writing to help myself come to terms with the loss of Channthy and to comes to terms with what comes next? Today is depressing, I’m in my room on the 17th floor of a comfortable hotel in Hong Kong… it’s been a great week here with my partner Kek Soon who is being wooed by a brilliant new restaurant company and the possibility of relocating here… but it’s an overcast day, a view of bleakness from where I sit and write in homage to Channthy, so I’m not going to reflect on things that have already happened but instead, write a letter to Thy.

What if you were still here?

Would you be calling me and asking me as per often you would “Hey Bong…what story do you have for me..? Something new?” and would I tell you “No sorry, Oun, no new stories today but lots of good things coming up… I’ll tell you more when I see you or I’ll speak with you tomorrow and let you know about things…”. I was always looking forward to calling you with something good to share… “Hey Oun…. you wanna here good story?” You would put on your funny cartoon voice… one that mimicked Youtube’s famous ‘Talking Dog” and say “Yeah? Yeah? really…. yeah?” then “Oh no….uh haha… you’re kidding me!”  But you and I would hang on the phone and talk ideas or propositions that had come my way and we’d simply chat on things we both felt like we’d like to do.

Recently we’ve been pretty good together, we want the same thing… we’ve really enjoyed our work and our trips together. Our conversation always felt close and warm until with I or you would mention something to do with our lives apart. For example Oun, you still can’t accept my girlfriend… my partner of four years with whom I’ve now been together for a longer period than our own marriage… why is it alright for you to bring your boyfriend or friend or whatever on tour but you can’t accept my partner? After all you left me… not me you. “Yes but your stupid girlfriend… she so rude to me… she got to say sorry to me… ” And this kind of talk would also end our phone calls… too petty, too silly… call me back when you’ve got something good to say… good story okay?

The next day either Thy would call or I’d call her… “What you doing?” I’d ask… and you would say “Oh nothing…” or so so had arrived in Phnom Penh and you were going to meet them or to work with them today or that someone wanted to talk to you about something coming up… often you would tell me you were tired… or not well… I would tell you that perhaps you needed to change your social habits and patterns… “Oun, you’re going out too much… now you’re smoking and drinking too much… you gotta have a break… no wonder you’re not feeling well… It’s okay for your friends to be out all the time but you need rest and you’ll soon be busy again… ” I would always say to you that I thought that if you used your down time to listen to the music you loved and to write your own songs, your own story that you would always be singing and working… “Oun, do you know Cesaria Evora? yes, you know her… the one that had a difficult life just like you but kept singing and performing until she was a grand old dame… I think you can do the same”. 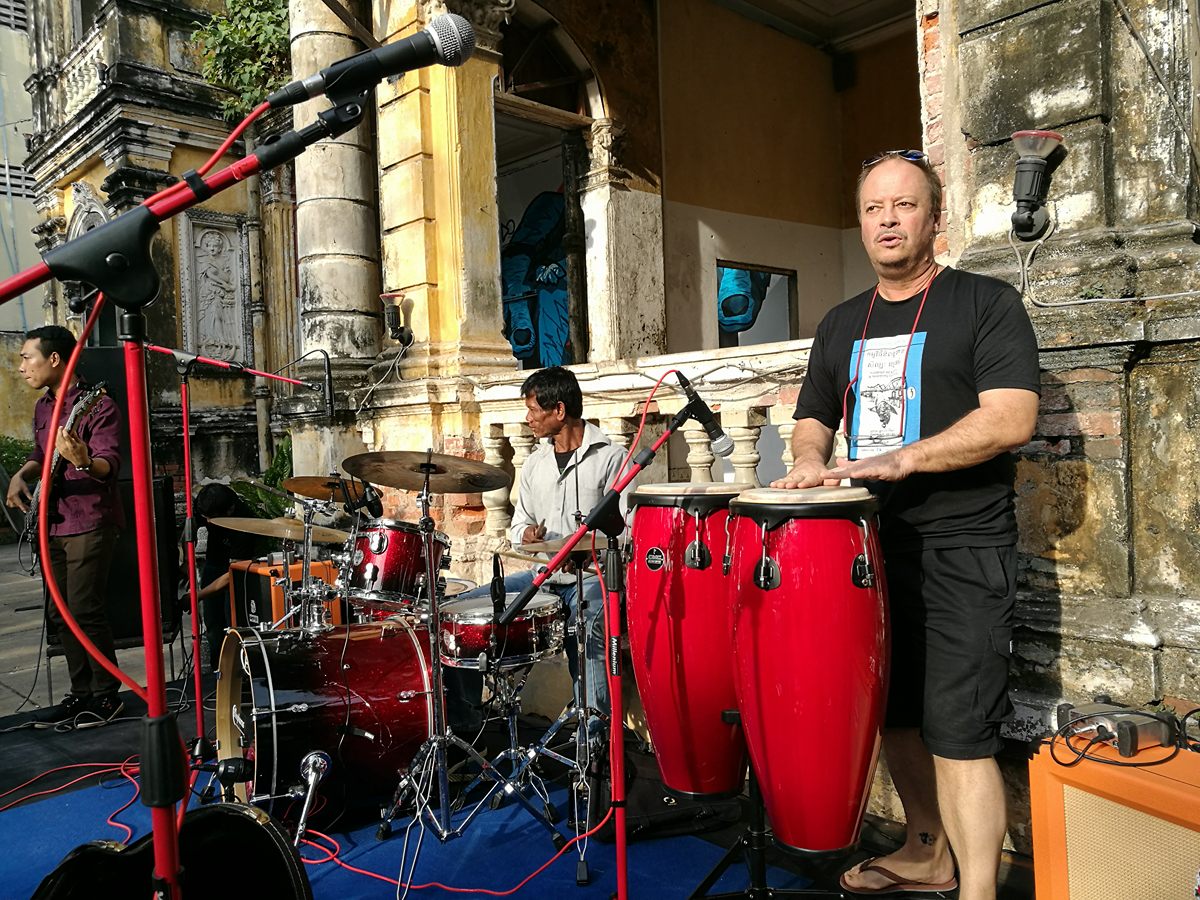 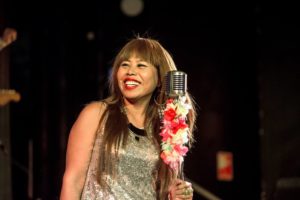 You would say to me that you were happy, okay in your life… “not worry about me”… but I would worry about you… I worried all the time. I felt that you felt you made a great mistake in leaving our marriage and that while you, at times, wanted to start again, our lives had moved on and for me especially, I was in a better place, more comfortable, an easier more understanding relationship and already having no desire to go back to the difficulties we often shared. At the same time I felt sorry for this… why had my own life and situation worked out better than yours, people had let you down and now you were living with the consequences. I felt sorry for you but could just as easily tell you “well that’s your fault” but it wasn’t just your fault, it was our fault, we’d let each other down. “Don’t worry Bong… I’m okay… I don’t need anyone… but I don’t marry again… in my life I only have one husband…. I tell everybody Julien he only husband for me… I only marry one time”. I would agree with you but just tell you that it doesn’t matter about these things… I still love you and we’re still together “Maybe we’re just married in rock’n’roll Oun… I’m sorry too but we’re still with each other and I will be with you all my life…until I die”. 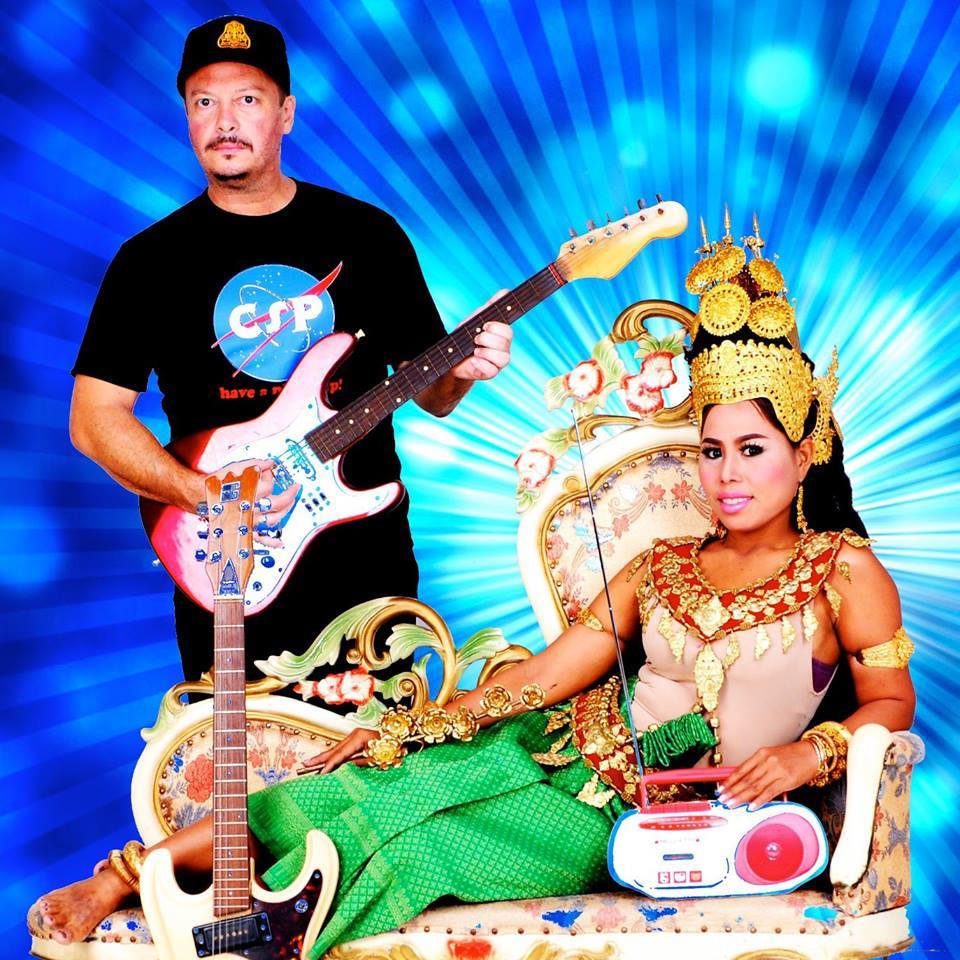 Just before you died you called me to see if I was in Phnom Penh already… but when I told you that I wasn’t coming as planned, I’d come a week or two later, you seemed sad. I think you had become lonely and despite having a loving family and great group of friends around, you were more and more alone to yourself. “Sometimes I feel alone too Oun. It’s all the excitement and business of being together, going somewhere…anywhere… being on tour then all of a sudden that’s gone and we’re back to normal life”. You would either tell me something about you new plans for local work, either with me and CSP or with your Cambodia band “Channthy Cha Cha” like “Hey Bong… I’ve bought a set of Red Congas to match my orange amps and now my brother’s going to be in the band”. I would say to you “Lenny? great…that’s a good idea Oun… can he play?” “Yes, he learning …but now I wan’t him go everywhere with me”. You were always trying to keep everyone together and help your families life improve too… I almost cried with you the day you phoned me in tears and told me “Bong… I’m so happy… I’m still crying but not sad Bong… happy…” then you told me “Makara came Number 1 in School…. I’m so exciting for him… “.

Most of the time you and I would share ideas by swapping song links or silly but funny little giffys to illustrate some kind of point or idea then you would call… “Oh …yes… I love that one… ” Then you’d break into a song, we’d talk, chat, share feelings, share hopes and ideas… “Bong… where are we going back to Switzerland?” I would tell you… “Well… I’m not sure… the phone from Switzerland didn’t ring today… but yes, lots of things coming up and I want to go there too…perhaps France too? definitely Norway… it’s booked already”. You would say “Oh good… I’m happy to go… I want to change something a little bit…new song something…”.  But just before you died, I’d been calling you to come and meet me in Phnom Penh… I had a small film job for you but you didn’t come… you left a message telling me you were too sick… This was just we met for your birthday and planned everything for the week ahead…what happened? I knew you’d been sick that month… You sent me photos and your doctors report for the hospital. You also told me that you were having a lot of stress and pressure from someone… “You know who Bong…. you know who I am talking about” who had been pursuing y0u, harassing you… all I could do was to tell you the same thing “I’m sorry Oun, be careful….something’s not right there….you need to look after yourself” and you’d reassure me “I know, I know Bong but he’s so fucking jealous… jealous of you, jealous of everyone… I just want to go away to be alone… “. And I told you that I thought that would be a good idea… in fact I told you that I was also going to leave Cambodia for a while… I had had my own pressures to deal with but we would have at least one more CSP show before I would to Tasmania, it would be on April 1 – anniversary since our memorable launch of Angkor Pop! our Iggy Pop compilation project at Freedom Park just on a year ago. You told me you understood… I was sorry I couldn’t help you more and you worried for me too… “Oun, I’ve booked the show already and also a week’s accommodation for you so you have have a holiday in your own city…” 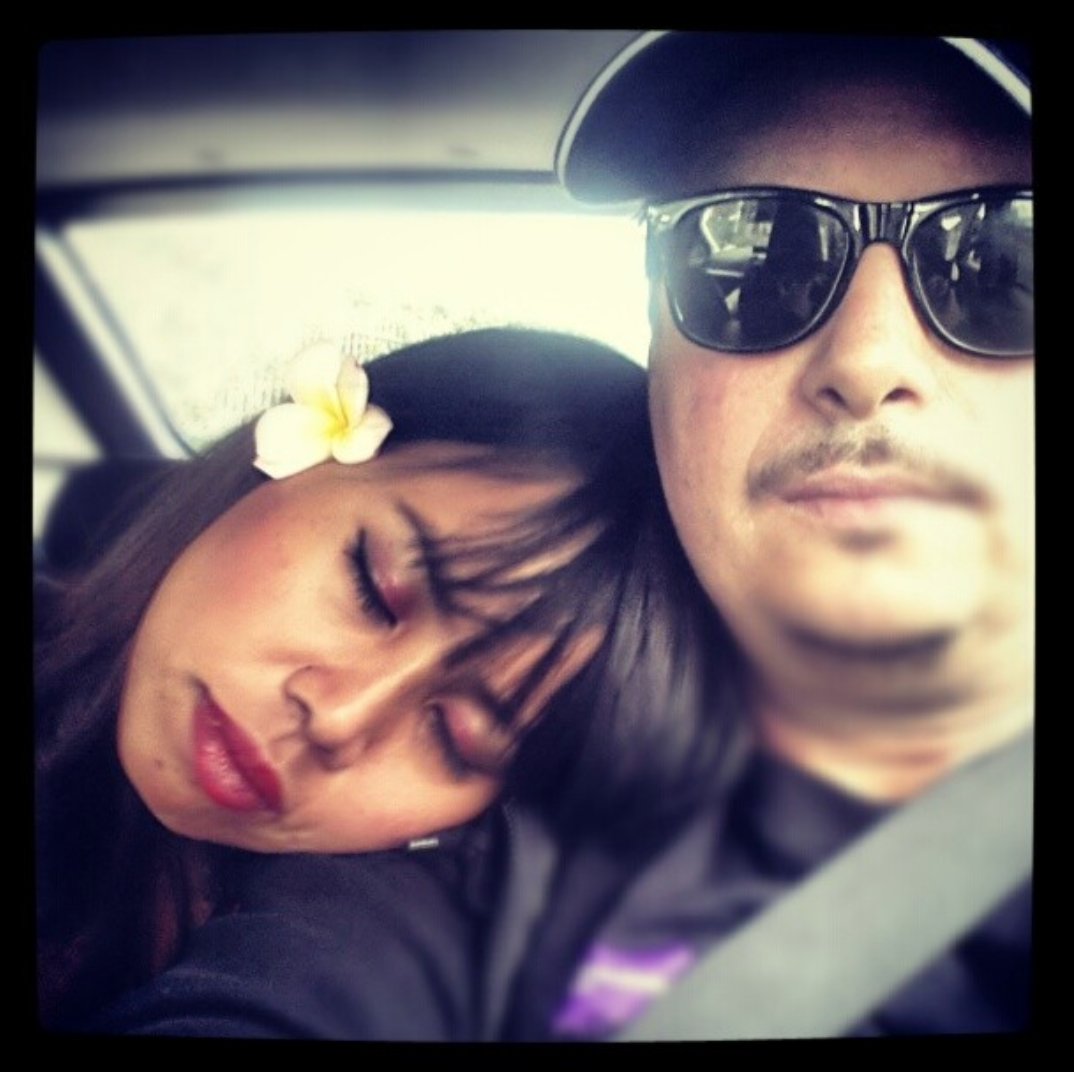 I was sorry you didn’t make it to my film shoot. Oun, it was the story I’ve been telling you about, a little film with our friend Mark Roy coming over from Darwin to shoot… a good story about a Cambodian singer “Oun, It’s based on Poev Vannary … a story to make with the band in big theatre… or perhaps it’s just a story about a singer… a singer like you”. You didn’t show up for the shoot, you sent messages that week and you apologized later for being too unwell to make it… I gave up on the idea of casting you in the little film Mark and I shoot without you but called Flicker & Fade and finally added your voice to the soundtrack.

“Oun somlang… my darling Channthy… I’m so sorry you are not here to share this news with you… but we’re going back to France…. your voice and your spirit is in this little film of ours and it’s been selected to screen at Cannes Film Festival… I’m really happy about this news… ” But I can’t tell you this… instead, on this bleak and overcast day, I’m feeling sadder than ever and that life is so much more empty without you. In a few minutes, I’m going to ‘down tools’ and head over to meet and old friend at a pub in Wan Chai… we’ll be talking about you and we’ll be reminiscing on the time we all met 8 years ago right in this same part of Hong Kong. In a few days time, I’ll be traveling on, alone, to UK then France and will go with the idea that you’re still with me in spirit… I will go with the knowledge that life will go and there’s much more story to come but also I’ll be at the Olympia Cinema on Monday 14th May and sometime after 8:30pm I’ll be expecting to be overwhelmed by your spirit and all my feelings and memories of you will flood back at the moment your sublimely beautiful voice comes in around 2:22 seconds into our 3:20minute short film Flicker & Fade. 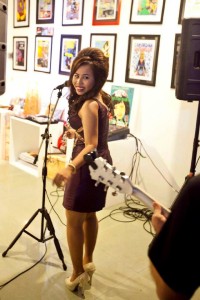 Please help support us to provide a secure future for Channthy’s 13yo son but donating to Kak Channthy Memorial Fund.