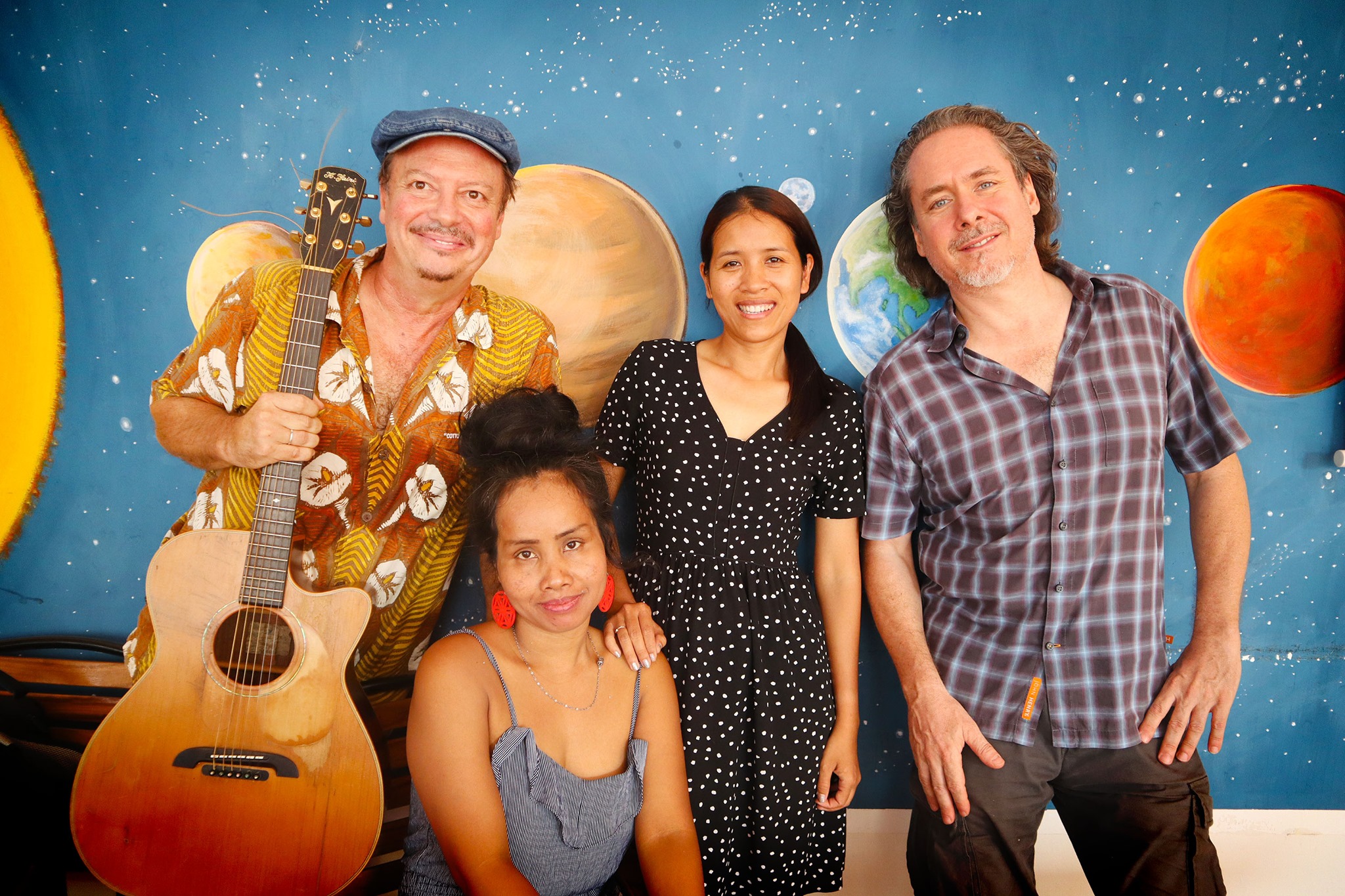 Good Times is the right word to describe this last week here in Cambodia. It’s also the name of a little bar, a place which boasts the smallest stage in Phnom Penh and a place that has inspired us to bring to the stage “Sochi, Dara and Julien” as a trio to showcase just some of the music we’ve been writing, jamming, rehearsing and developing over the last few months.

Last Sunday (a week ago on February 23) we got on stage at Good Times to show and play music in front of live audience and out of the rehearsal room. It was a great night and set-up our trio for a rather big music week which has including bussing to Siem Reap, performing a concert on what would have been Channthy’s 40th birthday on Wed 26, February, then spend a couple of days getting together with a rhythm section to include Ricky Haldemann on drums and Stan Pelaco on bass. You see, last night was also a milestone event, the 5th birthday party for 60 Road Studios – a place where we recorded The Cambodian Space Project’s “Spaced-Out in Wonderland” and it’s where we got a chance to return this week to record new music with the team that is forming around the project. So, after quite a bit of hotel room and poolside acoustic guitar and voice jamming, we again hunkered down to recording and the resulting work ended up as one new song which we’re calling Echoes From The Mountains… a co-write with singer Sam Dara who sings out about our trip last month, to seek out the hill tribe musicians of the mountainous Mondulkiri province. I’m really looking forward to hearing this track mixed and mastered, and it really does sound like mountain music, a kind of psych-rock-folk featuring Dara’s dreamy bell-like voice with back-up vocals from Sochi.

Almost as soon the recording session was done we were then up on stage jamming out ideas with the band and then again, back on stage for the 60 Road Studio mini-festival – an absolutely brilliant night featuring lots of excellent new Cambodia/Western fusion acts such as Sam Rocker, Vartey Ganiva, Melissa Lingo, Miss Sarawan and more… we were performing as the CSP Mothership and Sochi and Dara were also joined by two more beautiful guest vocalists who we’ll be hearing more from as they join up with “The Cambodian Women of Song”.

So, this week’s been all about getting new music out of the rehearsal room and up on stage but it was especially good to dedicate our acoustic concert at Pomme to Channthy, and to invite friends and fans in to show not only her work, through music videos and recordings but also to show how Channthy’s legacy is having a wonderful effect by influencing other and not least Dara and Sochi. By the time we hit the stage last night the acoustic trio had become a band with bass, drums, guitar and 4 singer/dancers up on stage – a pretty fabulous result considering we’d only just managed to get going with the trio last Sunday. The show sounding pretty darn good too but best of all it was a chance to get some our new music out to the audience and enjoy a great response. We would have all loved to stay until the end of the party at 60 Road but instead, we did the ‘pumpkins at midnight’ trick and vanished off down the dusty roads on the night bus back to Phnom Penh.

Tonight, March 1 is the final live performance in this week’s week of music and is a tribute to Channthy for friends in Phnom Penh who were not able to join our show at Pomme. If you’re in town this evening then don’t miss Sochi, Julien, Dara tonight at Good Times Bar, we’ll be there with bells on and really looking forward to airing a few more surprises while also celebrating Channthy’s life and legacy with all the music she has inspired. So, Good Times it is. See you there from 8pm.

One of the highlights of this last week has been seeing the turn out to our tribute to Channthy and in Siem Reap, where a film making team for ARTE called to capture the show and to speak with the singers Dara and Sochi about music, life and Cambodia.

Well, this is pretty cool… a local council in regional Australia has established the Maitland Space Project in tribute to the Cambodian Space Project… way to go! Maitland.

Maitland Space Project is a new creative co-working and artists’ studio space in The Levee, Central Maitland. It’s a space where artists work, and members of the public can drop in and see them making stuff, and perhaps purchase artworks or craft from their studio. The arts space was established as part of Maitland City Council’s Create Maitland initiative.

Behind the name:
The name of the space is a tribute to The Cambodian Space Project, an internationally acclaimed band established by Julien Poulson, a writer, musician and director of Kampot Writers and Readers Festival. The word ‘space’ plays with its dual meaning as a place where work gets done, and the idea of launching something new and experimental beyond the everyday atmosphere of Earth.

Big thanks to all who have made this last week super special and a great new beginning for our touring and live music shows, special thanks to John Connel, Brian Wood, 60 Road Studios, Chloe and all at Goodtimes, Oliver and the team Pomme, Harbour Bar, and to our friends and all of you who made it to a show! Awkun thom thom. It’s been good times and fun times for sure!