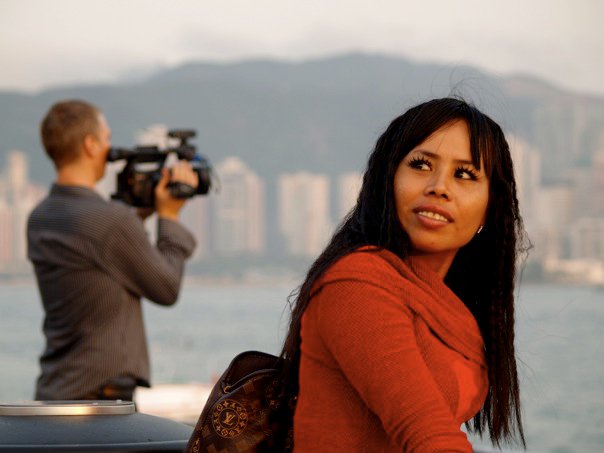 Day 14 of 100 days: writing on flying through Space and Time with Kak Channthy and The Cambodian Space Project 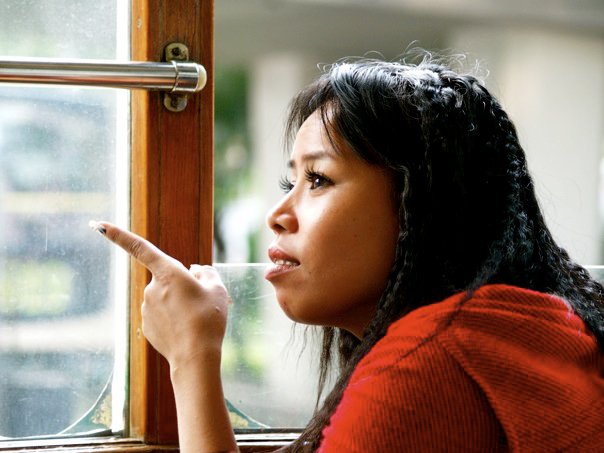 Today, I’m writing from Hong Kong, holed up in a room on the 17th floor of a hotel situated on Hollywood Rovid in Central Hong Kong. The location’s a stones throw from where I used to live some 28 years ago and memories are coming flashing back thick and fast. Just on 8 years ago I’d made a return visit to Hong Kong and had done this as The Cambodian Space Project’s first intrepid step outside of the Kingdom.

There were a few reasons why this seemed like a good idea at the time “hey guys… let’s go international! lets tour Hong Kong!” and i guess the main reason was to give Channthy a chance to experience something totally new, to travel but also for the band – or at least the concept of the band – to broaden its horizons. We also timed the trip to coincide with the Hong Hong Film Festival and at the time, I thought we had a great movie happening… camera man Marc Eberle was already following CSP’s progress and capturing as much as possible so on this trip Marc, Thy and I flew in first then waited for the rest of the guys to arrive. 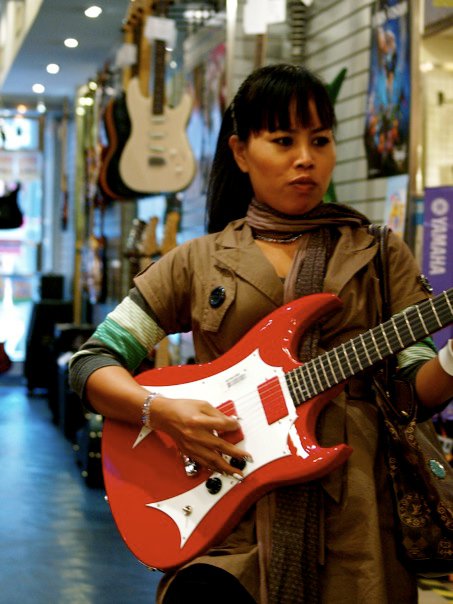 We spent time taking in the sights, riding the harbour on Star Ferries, walking around my old neighborhood from Central to Mid Levels to Wan Chai, taking in the view from the Peak and clothes shopping with Channthy. Marc shot some funny scenes with Channthy – who at the time had never even stepped on an escalator, or used swipe cards to open doors etc, let alone flown on a plane… the high-tech, hi-rise, Hong Kong effect most certainly blew Thy’s mind but at first she acted as though she’d seen it all before and wasn’t so interested “seen it on TV Bong” then started to play up to the situation in her own comical way…Thy used her sense of humor to navigate almost everything… Marc filmed some hilarious moments and soon we were joined by KM Lo who also had ideas for funny ‘Thy Goes to Hong Kong’ videos. 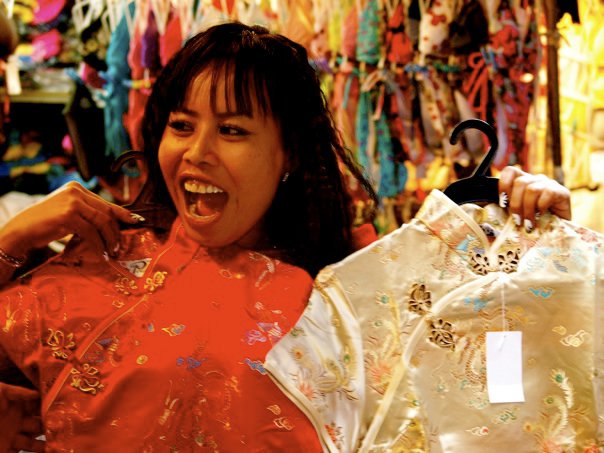 The comedy only intensified once the band arrived… coming in on separate flights… half whole motley crew arrived just in time to set-up and start playing at a tiny little venue called The Wanch… “what the heck! were were the others? who was still missing…  ” we started our first shaky show… a crack at ‘going global’ but with already only half the band present. Moments later the rest of the band turned up and we suddenly feeling the updraft of some kind of lift-off – needless to say this moment was captured really well in the CSP documentary that actually did get made and released almost 5 years later.

Marc and I left Channthy to rest the following day and headed off – uninvited – gate crash the Hong Kong Film Festival market and see if we couldn’t find some receptive ears for a wild and outlandish concept – a film about Cambodian Rock’n’Roll as seen through the prism of The Cambodian Space Project – a yet to be known band clearly set for world domination… well, that was kind of the pitch… we met a few half-interested folks but also Steve Warne, formerly funding and developing documentary films through Screen Victoria and has since become a great friend and supporter of the CSP. 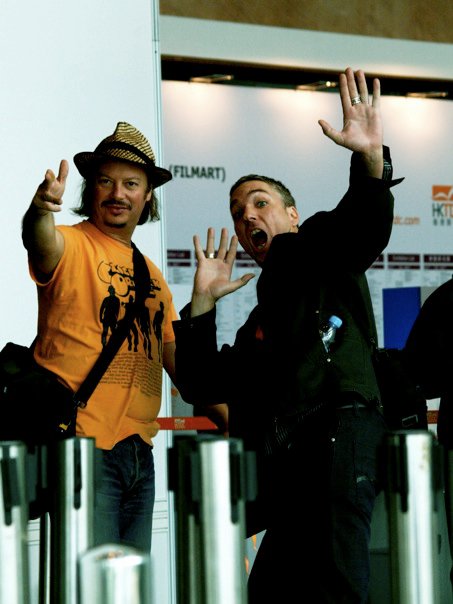 A night later we were playing our last show in town at an old friends venue, a place called HK Underground. Chris B had had an all girl band called Sisters of Sharon who’d been on the scene the first time I’d lived in Hong Kong… so even back then I was experience plenty of deja vu. The band played a great show that night, we were just so happy to be there, film maker KM Lo had turned up, shot an impromptu music video just before the gig got rolling and then during and after the gig a few more takes to make another clip to our version of House of The Rising Sun… 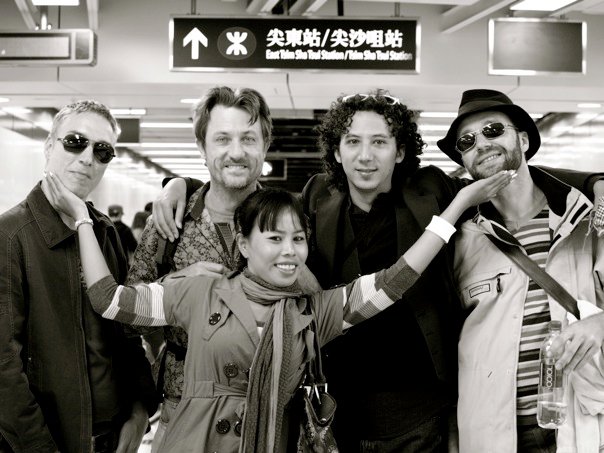 The CSP line-up in Hong Kong was what we’d later called the Kukuluku line-up after the name of a seaside guesthouse in Kep where’d we’d all hung out and played a show or too… actually that was the time we first really got Bong Sak in on drums and it was just a few months before our HK trip but we left Bong at home and ran with Scoddy Bywater slapping away on the skins, Gildas on bass, Ken White on harmonica, Gaetan on accordion and me on guitar. It was a fun line-up though a patchy set of songs but plenty of rough diamonds taking shape. The most eventful things on this trip were the complete surprises along the way… after we’d wrapped up our short set at The Underground we strolled a few blocks looking for after-gig-food… the streets are quite and all the shops are looking closed. Suddenly a local appears… “gesticulates with hands flaying about and some grunting noises…. Cantonese mixed with bits of English… “You… come me … want eat food.. I have eat for you… restaurant! can! come me…” and so we followed this food piper of Wanchai and lo and behold… just minutes into the walk…the man stops, unbolts a padlock, throws open a steel roller door and proceeds to cook! and cook he does…flames leaping off the stove, chef man dashing and splashing sauces and slapping down icy cold heinekens on our table… it was one of the best Chinese style meals i’ve ever eaten and definitely the most memorable restaurant welcome I’ve encountered. Channthy had just put on a great performance and had totally relaxed into everything, all of a sudden she was queen or her own domain and was ready to go anywhere… she’d taken her first step and conquered. We were with a great group of friends loving, laughing and having the time of our lives.

Now it’s 8 years on. The reason i’m back in Hong Kong tonight is to be here with my partner who, like Channthy, grew up in poverty and hardship in Cambodia. Soon and Channthy didn’t get on these last four years and had no reason to like each other but did have many things in common. Channthy’s start to what became and extraordinary international career began with her first tentative steps in traveling to Hong Kong. Soon’s here this week because she’s been ‘talent spotted’ through a story about her work as cook and cuisine tour guide and will now be introduced to one of the most progressive and successful restaurant companies in Hong Kong… a move that will quite possibly lead to phenomenal in life and to a success story that was once upon a time unimaginable for Soon. For me, I’m thrilled with this exciting news but it’s still a great opportunity that comes at a terrible time. There will never be a day in my life that I don’t feel utter sorrow for the way Channthy’s life and career – just as she was really getting going – was cut so tragically short. 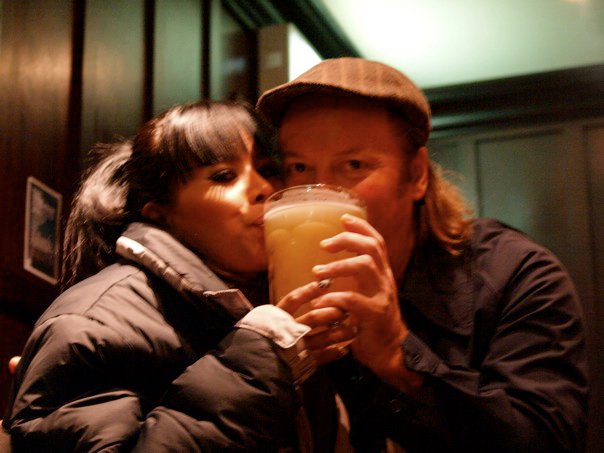 This week I’ll guide my partner (we’ve been together four years) around Hong Kong and hope for the best – a flying start for another fabulously talented Cambodian women and a twist in life that is completely unexpected. Then on Sunday, I’ll leave Soon to find her own way home and will head off in a round about direction towards the Cannes Film Festival where the little Super8 movie Flicker&Fade – made by Mark Roy and I . will screen and perhaps attract enough attention to help us make a bigger film – one that will become my labor of love for the next fews years and a tribute to Channthy. Before Cannes, I’m stopping first in London where an old friend who I knew back in my first days in Hong Kong will meet me at 5:55am Monday Morning and take me for a visit to meet his daughter in Reading, a young woman who has just made a film school graduation piece titled HOME – and this looks brilliant. 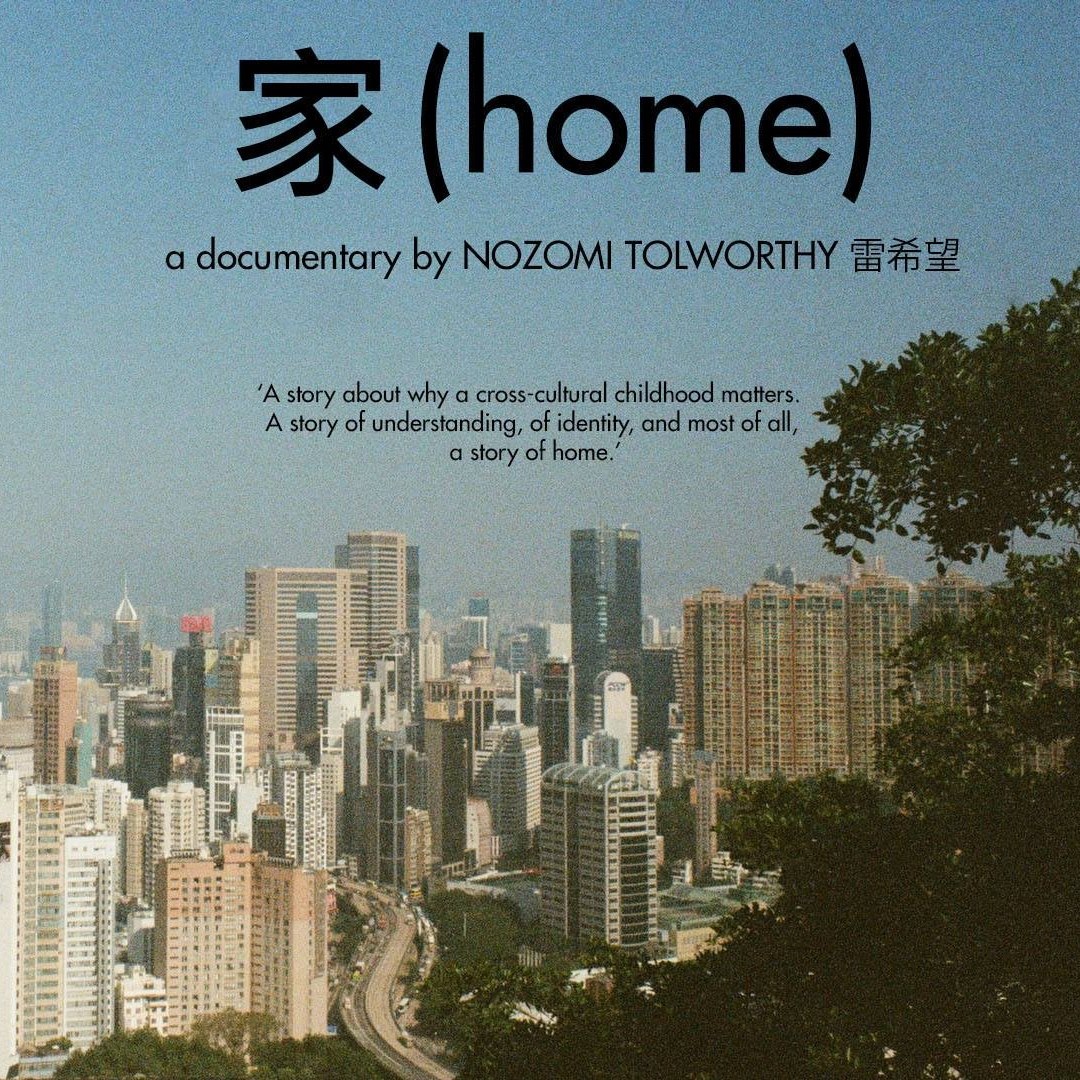 Meanwhile, Tolly and I will get to hang out and reminisce on our lives, our great times playing together with Channthy (Brian aka Tolly’s been on bass twice on CSP UK tours) and think about what comes next in terms of  The CSP Mothership. By this time Soon will have already flown back to Phnom Penh and will be heading home to Kampot and to think about Hong Kong while I’ll still be feeling like traveling CSP’s entire tour history backwards… back to all the places and people Channthy and I met, when far from home, to thank them all, the people who took us in as often weary ‘space travelers’ us and gave us strength to keep going…. the anonymous man with the restaurant in Hong Kong was one of them.

For 100 days I’m writing here in homage to Channthy and to remind you that my team will continue to campaign for funds to ensure the well-being, security and future of Channthy’s 13 year old son Makara. Before leaving Phnom Penh I caught up with Channthy’s son Makara for some spaghetti and a came of pool at the FCC. He’s a fabulous y0ung man and Channthy would be so proud to know how well Makara’s doing at school right now – number 1 in English. Please lend a hand support & share Kak Channthy Memorial Fund. 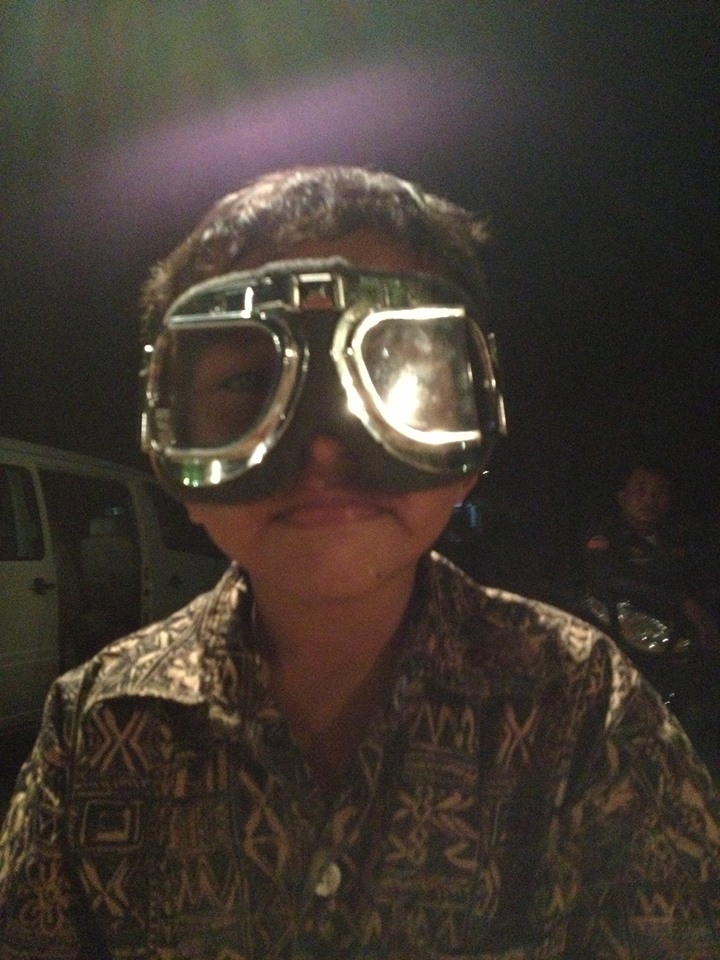 By the time CSP was up, the crowd had swelled considerably; good thing, too, because they were really worth watching. With the drummer’s pink coat, the variety of hats on display on the band-members, the Noel Redding-looking livewire of a bass player, and their striking singer Srey, they were as much a visual spectacle as they were a sonic experience. The groove began right away with Wa Wa Wa, with its sort of rural, dancy mood (courtesy the accordion), and cheeky-sounding vocals, making all present begin to sway immediately. The guitars were excellent throughout, having a very bluesy sound, yet played with a light touch so that the cumbersomeness that usually accompanies the blues was absent, giving their sound a very enjoyable freshness. The solos and riffs could have spilled off the guitar of Mark Knopfler in their ease. There was some stirring harmonica onAu Go Go, while a version of the Troggs’ Wild Thing riff featured on Old Pot.

It was tremendously clear how much these guys love playing music – from the Srey’s dancing (which compelled you to join in as well) to the drummer and bassist feeding off each others’ energies, they were as involved in the music as anyone else. (All this, despite their packed schedule shooting for a video, and playing 3 consecutive nights!) There was good-‘ol rock ‘n’ roll in the songs’ as well, especially the blistering solo on 16, dubbed “a melting pot of all their Western influences”. Sadly, the set had to end sometime, and it did so to each instrument booming in its own way, while people danced like crazy in the front. Apparently, their sets usually are much longer and more free-form, with 10 or 11 people playing; one could certainly imagine this happening, as the dynamic was very much the-more-the-merrier. Perhaps, if Gogol Bordello played the blues, they might happen upon the territory that CSP just blasted off from. ‘Till then, keep watching the skies for any sign of these orbiting rockers. 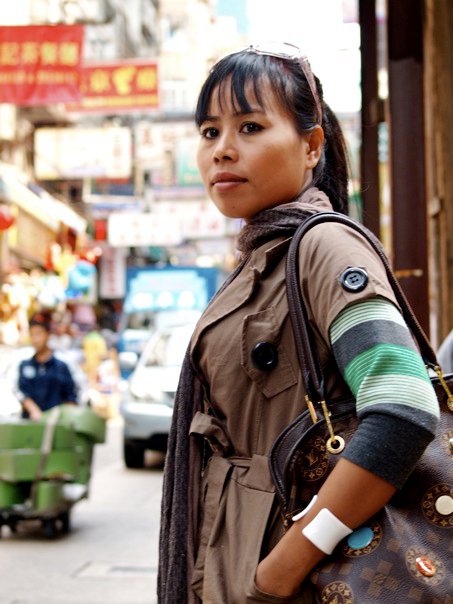