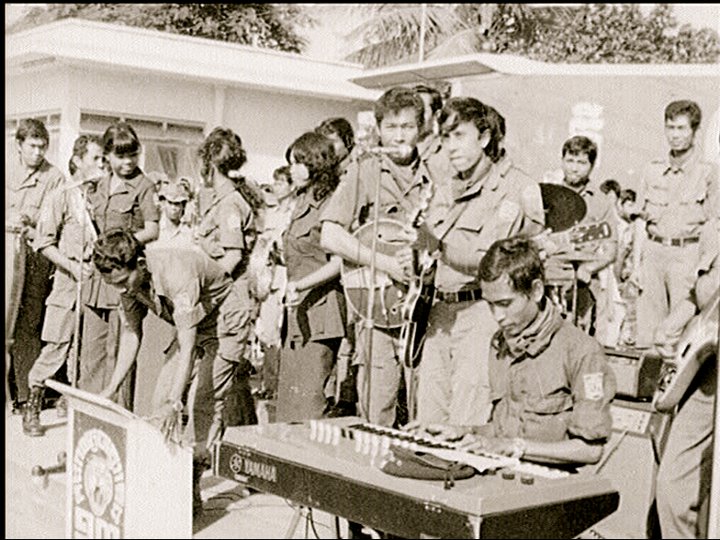 Latest addition to the CSP family is an early 70’s Yamaha YC-20 organ. I broke my shoulder back in December and still can’t play much guitar so the solution to not missing out on CSP shows at Sydney Festival back in January, was to find a keyboard and learn a few one-armed riffs and chords. With a bit of googling, I managed to find a YC-20, still in good relatively good shape (better than me) being sold on Gumtree by a member of Sydney band The Cops! Turning bad luck into good… I called the cops! and next thing I knew was THE sound of South East Asian garage rock’n’roll was delivered our rehearsal space in Redfern. Now i’ve just gotta learn to play the damn thing and for inspiration, I’ve stumbled across this amazing archive photo of the exact same keyboard (they’re rare) being used in then free rockin’ Cambodia! expect to hear this beast on the next CSP album. Distinctive sounds – think ? and the Mysterians, the Doors, Ska and of course Cambodia Rocks compilations.


Coming up in May, The Cambodian Space Project will be opening its (studio) doors to the public and invite you into our rehearsing, writing and recording process. We’re doing this via a ‘music friendship’ project called “Motown to the Mekong” where we bring Detroit based producer Jim Diamond (The White Stripes, The Dirtbombs, The Sonics) to Cambodia. Jim will join CSP touring the Kingdom in may but will also get involved in our local music community through ‘Meet the Producer’ workshops, talking about his own wild sounds from Ghetto Studios, Detroit through to his passion for freaked-out South East Asian garage rock. Diamond produced CSP’s “Electric Blue Boogaloo” LP – recorded in France – and with the support of the USA Embassy in Phnom Penh, will be traveling to Cambodia to record tracks for “Boogie Wonderland”.

Motown to the Mekong is the title we’re giving CSP’s touring and recording activities throughout the month of May in Cambodia. It’s a concept by The Space Agency (Bong J and da Fixer) to explore the convergence points of Western and exotic South East Asian – Cambodian rock’n’roll. Think Vietnam War era songs, Motown hits coming in from GI Radio then the influence on Cambodian musicians who inturn interpreted this new music in their own way. Not strictly Motown – our project is a great excuse to play a live set mixing up the hits of the late 60’s through to mid 70’s and that includes The Ronettes through to Ros Sereysothea’s gorgeous reworking of Credence Clearwater Revival’s “Who’ll Stop The Rain”. Sadly, the war in Vietnam had well and truly engulfed Cambodia by the time Sereysothea’s last East meets West recording appeared. The Khmer Rouge took Phnom Penh in April, 1975 and Ros Sereysothea along with nearly all the Cambodian musicians vanished (presumed murdered) in The Killing Fields.

CSP’s Motown to the Mekong tour includes public workshops, collaborations with local dance groups, musicians and recording studios and a series of live shows. We’ll be documenting all the activity here as well as filming and recording M2M as it’s sure to yield some exciting results, a lot of fun times and perhaps even new music that draws its inspiration from echoes of the past and creates new sounds for today’s thriving Cambodian music scene.

Check the links below for just a few of the songs that are on our playlists.

Check out these alternate versions of Black Is Black

HEARD IT THROUGH THE GRAPEVINE – CREEDENCE CLEARWATER REVIVAL

Spirit In The Sky Norman Greenbaum