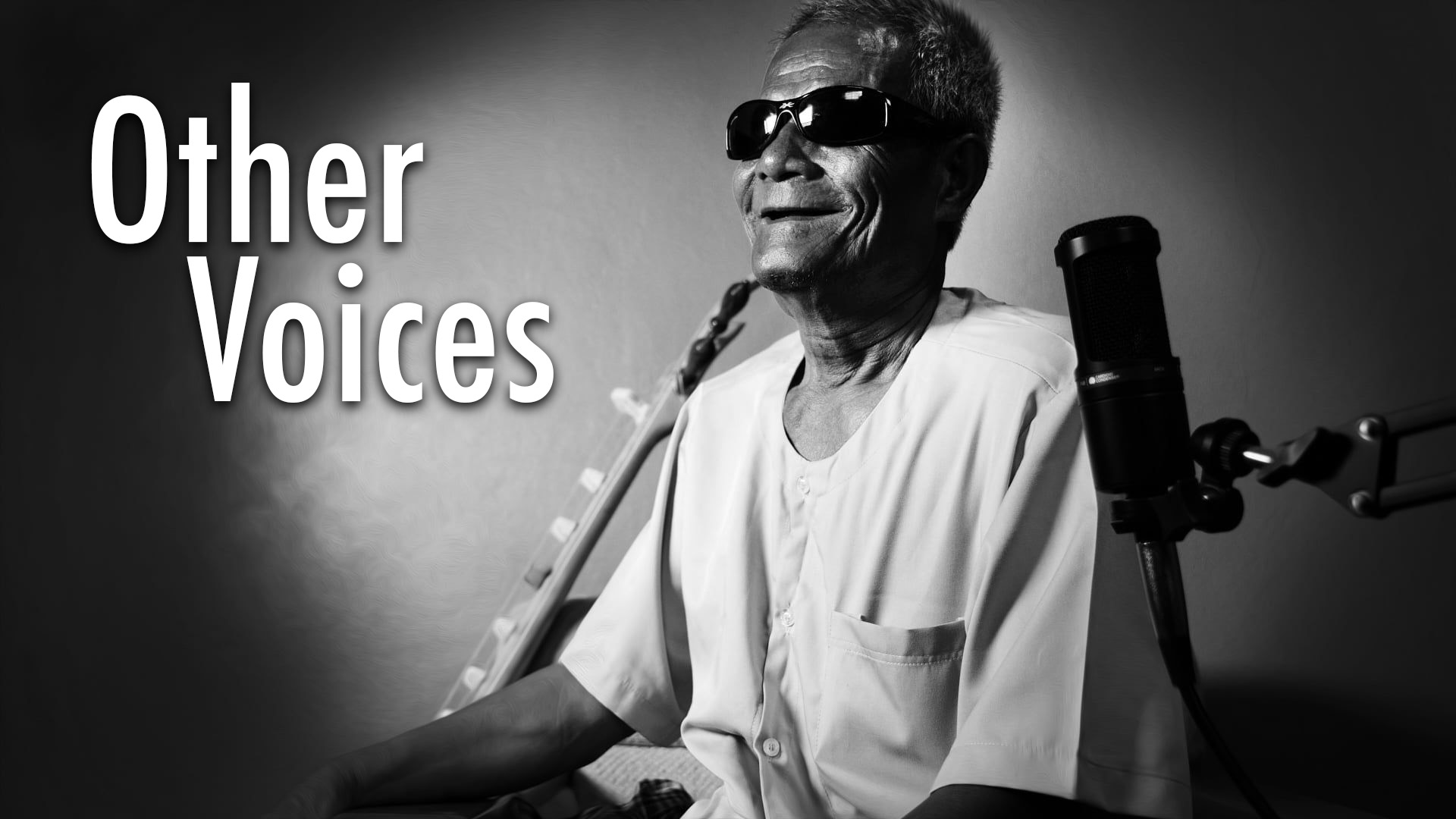 This Sunday in Phnom Penh, family, friends, and fans of Kak Channthy and The Cambodian Space Project will be getting together at Bosporus – a friendly dive bar near Russian Market that has become an important venue and meeting spot for the music community. Bosporus is also right next door to the home of Makara (Channthy’s son) and this occasion is also to show support for Channthy’s family and to register copyright of IP to Makara as Successor in Title with APRA (Australian Performing Rights Association). The event is open to all and kicks off at 6pm with entry by donation. We’ll be screening a program of film and video and will hand the stage to any guests who would love to share their own memories of what Channthy and her music journey mean to them. This comes at a time of 5 years since Channthy’s passing and lands us in a very different Cambodia from the one she knew.

It’s no surprise to me and those closest to working with Channthy that her voice is more recognised and heard today than ever before as it really shows how a voice of integrity, meaning, and truth really does endure. As an artist and co-pilot of the CSP Channthy really did create an extraordinary body of work, she made her own self, her image an artwork and while her performances and singing were always brilliant, there was so much more to the ‘barefoot diva’ of Prey Veng province. Lately, CSP’s fourth album Electric Blue Boogaloo has resurfaced on a Youtube channel “Underrated Albums”. The comments and feedback on the Bandcamp link to this LP are revealing and motivating to all of us in CSP land to continue to respect Thy’s legacy and to carry on the creative journey and that’s just what we’re doing.

Recently, there has also been a lot of attention along with numerous remixes of Channthy’s “Woman Wants to Drink”. This is a track first recorded and released by Sydney-based group Astronomy Class and is a huge hit in Cambodia with millions of views on Youtube and, as we approach Channthy’s memorial event, it is a song being used for a beer commercial. This is sadly ironic as Channthy was killed by a drunk driver and from the many companies who are using her song in their product promotions and events, no one has made any effort to contact the family or offer any compensation. Astronomy Class registered the work as their own but the song words and melody are certainly something Channthy would sing well before contributing to the official recording and release. It’s a sad but not unfamiliar situation for recording artists and hopefully, this will be worked out in the future and lend some benefit and financial support back to the family. On a brighter note, Makara, now 17 years old, has become a budding media producer and has talent in photography, film making and is now producing his own remixes. Chan Rean, Makara’s 2nd mother, also continues to run her little record and print art shop in the Russian Market and makes a small income through sales of physical products such as vinyl records. Rean has stock of Cambodian Space Project vinyl and the Astronomy Class LP and will make this available at Sunday’s memorial.

Channthy and The Cambodian Space Project journey has also been well-documented in film and music videos over the years but it’s very much unfinished business. The feature film Not Easy Rock’n’Roll aka The Rise of a Pop Diva by Marc Eberle was supported at the time by national broadcasters including BBC4, ABC Australia, Deutsche TV, Swedish TV and film funding bodies but has since ‘disappeared’. Since Channthy’s death, we’re often receiving inquiries about the film and ‘where can it be found?’. I think that the answer is probably again something to do with copyright but I’m not in contact with the producers and really don’t know. While I did much at the time to breathe this film into life and lend much to the production, I lost contact along the way and I’m not a big fan of the direction it all went. In many ways, it was a beautiful story that got dumbed down and has since ‘gone south’. A lost opportunity but that’s just my opinion, others loved the CSP film however you rate it, it’s still stunning visually, has great music (of course) and many will find this a fascinating story. Marc Eberle’s other films include The Most Secret Place of Earth – which is an absolute masterpiece documentary on the CIA in Laos.

Marc’s film came up in conversation with Makara who is very much wanting to collect together all his mother’s work. Makara says he spotted Eberle on the riverside in Phnom Penh and was sure it was him “he’s very tall” but didn’t get the chance to talk to the filmmaker. I promised to email Marc and invite him to Thy’s memorial this Sunday and hopefully, this might lead to a conversation on his documentary on CSP and where it’s at. But there’s one thing for sure, life is uncertain and none of us could have foreseen the tragic and untimely death of Channthy. Her star shines even brighter today and her extraordinary life story really deserves another film to be made. I’m sure this will happen in the future as there’s so much more to the story that remains to be told.

Other Voices is the title for an ongoing recording project and is something that feeds back into new work from the Cambodian Space Project. OV is part documentary and is also a journey to seek out the curious and fascinating voices of Cambodia. It’s happening at our newly built Yellow Submarine Studios at Fish Island Community Arts Centre where we’re able to record important heritage artists like blind Chapei player Master Leng Boeun (above) as well as the next generation of young singers who hail from surrounding rice farms and fishing villages. In many ways, it’s a focus on singers who’d otherwise be overlooked or never heard. It’s been a busy time at The Yellow Sub and I’m happy to say we’re already hearing amazing voices across a demographic that ranges from 7-year-olds to 70-year-olds.

Other Voices is a playful fun project that will soon lead to some very exciting new releases. Over the next couple of months you’ll also see me out on the road with a little team to go and reach those who can’t easily travel to the studio in Kampot. I’ll be connecting again with singers I’ve often featured hear or in collaboration with The Cambodian Space Project including indigenous musicians in the mountains of Mondulkiri, CSP drummer Bong Sak’s daughter Nang Ye-Ye and new faces such as Or Sina who first came into the production family by joining The CSP Mothership onstage in Siem Reap. You’ll be hearing more from Sochi whom I’m working with here in PP right now and several of the excellent singers we discovered through our earlier Cambodian Women of Song project – a brilliant project first launched at Institut Francais and followed by an event at FICAC to launch the new community arts centre on Fish Island. It’s come a long way already and I’m very impressed by the Cambodian singers such as Or Sina who traveled two days on a bus to get to the studio door and start making her first recordings.

We asked Master Leng Boeun if Chapei Dong Veng (Cambodian long-necked lute) was like Banjo in the sense that it’s impossible to play a sad song on that instrument. He took a moment to think about the question and came straight back with “hell yeah… Chapei can have sad songs too… here’s one for you”. It’s an absolutely wonderful performance and so great to be launching our new Yellow Sub Studios with artists like this. We’re not ready yet but will be bringing you subtitles and a short film on Leng Boeun and his life story. #fishislandcommunityartscentre #mekongdeltablues #yellowsubstudios #cambodiarocks #chapeidongveng #fishislandrecords

The next release by The Cambodian Space Project is most likely going to feature many of the fantastic Cambodian singers who have been part of the journey – a journey of new discoveries through Cambodian Women of Song and now Others Voices. It’s super exciting new work but yes, I know, I say that about everything, however, the challenge here has been an international collaboration and working on songs and recordings through times of lockdown and across borders and countries. The main man behind this production coordination is a great woman and great musician Julitha “Tappy” Ryan. Julitha and I worked together on The Road To Tibooburra and most recently got down to recording Funkee Junktion at Julitha’s home studio at Junction Street in Preston, Melbourne. From the junction we reached out and recorded tracks in the UK, artists in Cambodia and Melbourne’s own amazing man of many horns Jack Howard (Epic Brass, Midnight Oil, Hunters & Collectors) whose horn parts and arrangements on this album are amazing. I really can’t wait to share this work with music lovers out there as it truly is World Music coming right outta Cambodia. There are plenty of original new songs and a few covers including Talking Heads “The Great Curve”. With the album near completion, it means this work will also feed into media arts training at FICAC including music video production. Exciting times indeed and this LP is again, something that Channthy would have loved, it’s very much in keeping with the CSP direction and carries on the legacy in a beautiful, funky, fun way. Stay tuned.

Dusting off the vinyls for some seaside action in Kep

I’m getting back into the swing of things and for all you vinyl lovers, getting out and about with the turntable and a stack of great records including lots of rare and super cool South East Asian Rock’n’Roll. It’s a real honour to spin a set at the beautiful, retro Sarvoan Hotel on Kep Beach and of course, this is an event in support of something very local and very cool – Kek Soon’s Cambodian Kitchen and Soon’s junior chefs will be working over Fri 25 and Sat 25 on a rather delicous showcase of their cooking talents and Kep’s famous seafood. Soon and her team offer up Fish Island Shrimp Burritos, Basque style Seafood Soup, and Cambodia meets Colombia Apertizers… all this mixed in with music and the delicious cocktails that Sarvaon’s proprietor Annemarie Sagoi is famous for. Annemarie even has a Cambodian Space Project cocktail on the list woohoo!

Did I mention what a fun place Cambodia can be?
Breaking News!- Pre-flight PCR testing no longer required – No RAT testing on arrival – The issuing of Visas on Arrival has resumed- 14 days mandatory quarantine for unvaccinated travellers still applies. Be aware that this information may take some time to filter out to the Airlines, and don’t forget to double-check transit destination requirements.

So it’s encouraging to see things are happening back here in Cambodia but these COVID years have been very hard on locals, regular people struggling to get through times and waiting for the tourism industry to return. So now it’s looking like the lights are back on. We feel for all our Ukrainian friends and those now affected by Putin’s insane war and are in solidarity with all those against war and in support of the countless people who will be forced to seek refugee status in lands far away. The war in Cambodia is still in living memory and still adds to the stress and hardship of many.

I’ll leave you with this haunting song by Kak Channthy and The CSP – The Boat – let’s never forget! be kind, be humane, be happy and join us in memory of Channthy this Sunday at Bosporus.
– All the best, Julien