Sochi, Dara and Julien: an acoustic preview at Good Times 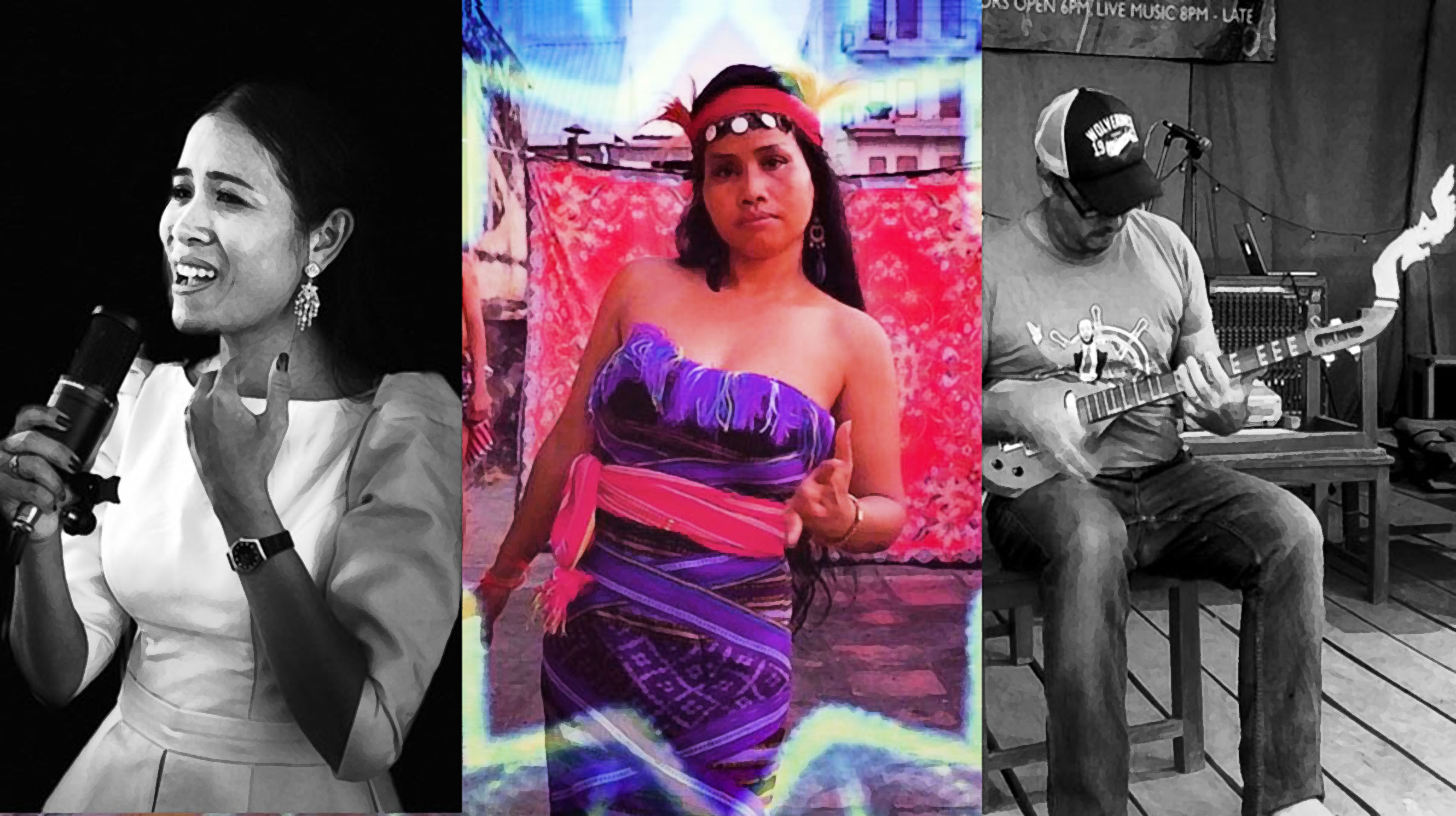 This will be fun! it’s the first time I’ve had a chance to get together with Sochi and Dara and perform ‘a little acoustic preview’… taste of some of the cool new music we’ve been working on, and this is pretty exciting! It’s also something that has been in the pipeline for a while but thanks to a gentle prompt from the lovely Chloe, owner at Good Times Bar (a fave watering hole for the Phnom Penh music community), I’m booking myself a ticket on the train from Kampot and will be looking forward to seeing friends this Sunday night. It’ll be a great chance for me to catch up with two of the brilliant women with whom I’ve been producing and co-writing new material over the last 6 months and to perform some of this material to friends and fans of the CSP.

I started working with Sochi almost by accident. You see, Sochi came with a house (owned by an Australian friend) that had been loaned to me as a studio working space in Phnom Penh. I’d known Sochi for quite some time already but her keenness to write and sing her songs was totally new to me.

I arrived one afternoon to start setting up a bit of music gear and there was Sochi, ostensibly and to the best of my knowledge, the caretaker of this fabulous old Phnom Penh style house, right next to the Night Market, but before I’d even managed to unpack my guitar, Sochi was already telling me she’d like to ‘book in for recording studio’ and was singing me her song ideas. For a moment or two I tried to ignore this but after a short time, joined in and before the end of the day we’d penned two or three songs – great songs! So, tables turned and it seemed I might be working for Sochi! I mean wow! I am quite busy but this upstart jumped in and got me back to work on the stuff I love doing, dreaming up, jamming out groovy bits of music and all the other ideas that come with the process.

Sam Dara and I met after I’d put a call out for helpers to help bring together a tribute concert for Channthy. Dara and I met and she told me she wanted to work with me on the ideas I’d outlined because it just sounded ‘so inspiring!” and at that moment that’s all I really wanted to hear. We set about organising a tribute for Channthy and the first performance for Cambodian Women of Song, needless to say this was a great thing to do and very wonderful and of course, emotional for all involved. We really did bring a very inspired and brilliant group of people together and did Channthy proud! this has also become an ongoing work – The Cambodian Women of Song: A tribute to the siren singers of Cambodia so there’s lots more to come, including dates coming up in Australia.

But along the way to the show, I’d also discovered Dara’s excellent ability to sing and to really frame her ideas into very cool songs, the first song we’d sat down to jam on was something about eating noodles at night but there was already a whole lot more. Soon we started working on themes and lyrical ideas and I loved the results on all of this work, some of the music and lyrics have taken shape and been completed as songs for the CSP Mothership, other material is still being shaped and will find its way onto the next album by The Cambodian Space Project – yes, there will be two new albums coming out this year and 2021.

Working at the Phnom Penh ‘night market’ house – enter via Rat Alley! – sessions for both Sochi and Dara began have, at times, blurred together. So, there are quite a few tracks where both singers will feature at our upcoming live shows but also Dara and Sochi have quite different individual styles. Sochi’s raw, intuitive and Cambodian bluesy… countryside lady! whereas Sam Dara’s work is much more informed by her Khmer classical training at Royal University of Fine Arts and by her own penchant for vintage girl group style songs. So, the chance to get together and ‘road test’ some this new music in public is exciting but it also means I’d better start doing some practice! I mean there’s been so much going on and personally, I’ve just been skimming across the top of it all, it’s the singers themselves who have been honing things and I’m as excited as anyone to see and hear where it’s all at!

Most of the songs I’ve been working on with Dara and Sochi have been things I’m playing and writing on an old nylon string guitar. It’s a beautiful thing, a guitar I found in a Japanese second-hand shop in Kampot and at first glance, I could see that this poorly cared for, stringless thing, might be something special, I layed my money down and googled the luthier as soon as I got home… there was something about this guitar, it looks just like a Yamaha student model (they’re alright!) but I soon discovered it’s a little handmade classical guitar made by Ryoji Matsuoka – the M20 – Classical guitar is just beautiful and it’s been a really handy little twanger for these songwriting sessions. I think another reason I’m really attached to this guitar at the moment is it’s something I’d used on the last recording I ever made with Channthy. I’d just bought the guitar and a week later Channthy had turned up, unannounced, in Kampot with a documentary film crew in tow… the team were making a pilot series called Facing The Music and had wanted to film Thy on the top of Kampot’s tallest hotel, to catch the sunset, I got the message late, so just grabbed the easiest, lightest piece of equipment to bring over and perform impromptu on the rooftop, we recorded Channthy’s haunting song “Broken Flower” and while, I’ve found this beautifully filmed performance hard to watch, I’ve continued to love playing my Ryoji Matsuoka. I’m looking forward to using it live for the two acoustic nights coming up with Dara and Sochi.

Another reason why I need to put in some practice is because of the time I’m putting into another young group of aspiring musicians, and these are the kids who’ve joined our Stepping Stones program out on Fish Island. I’ve been overwhelmed by how quickly things have happened at Fish Island Community Arts Centre – an initiative I’ve founded with my partner Kek Soon – and considering this site was a swamp just 4 months ago, we’ve now completed work on a kitchen, bar, restaurant area, a stage, a small production studio ‘Sonic Shack’, and school and learning facilities. The doors are now open! and with that we’ve recently had 60 kids from villages and fishing communities on the island, join us here at FICAC. Our doors and program needs are also open to musicians and artists who’d live to volunteer and stay here in one of the cosy bamboo bungalows we’ve built to accommodate guests.

The facilities at FICAC are something totally new out here (where I’m writing this post from the kitchen) and it’s brilliant to see how they’re already being put to great use. My focus is of course, music and art but we’re also training youths in our kitchen and cafe Kama. FICAC will be the centre venue for this year’s Kampot Readers & Writers Festival and over time it will become a retreat for writers, singer-songwriters and a place where I will work with local musicians to develop new ideas and material.

The first music video we’ve made out here is this track featuring Sam Dara. It’s called Winding Back Time and deals with the rediscovery of heritage and history through finding an old guitar, a case full of photos, an abandoned seaside villa, and imagine the sounds of a great band playing back in the day, perhaps at a coastal resort like Kep. It’s quite evocative of the images of Cambodian legend Sinn Sisamouth, holidaying back in the 1960’s at Kep Sur la Mer!

I’m also looking forward to a road trip this coming week, and it’s the road back to 60 Road Studios where the CSP’s last album was recorded in 2017. 60 Road Studio has gone from strength to strength and these days, it really is the Abbey Road of the rice fields! The team at 60 Road is throwing a party to celebrate the studio’s 5th Birthday so I’m planning of getting up on stage on Saturday 29th to jam out a few fresh new songs that will have just been tracked. These will be songs that I’m recording with Sam Dara and guests and will hopefully be a strong indication of the music and direction things are going in. The songs we’re planning to record with Dara are for her own solo release but her voice and lyrics will also feature on several of the tracks for a new Cambodian Space Project album that is presently titled
A Vast Radiant Beach.

A Vast Radiant Beach. Is a conscious decision on my part, to continue working as The Cambodian Space Project and to take a line borrowed from Jim Morrison as the title for this new work – something that has been worked on and recorded over these last two years – bringing together CSP musicians who are based in London, Cambodia and all the way back to Melbourne, Australia where I’ll be putting the finishing touches on AVRB later this year. It’s a way, CSP has always worked and A Vast Radiant Beach brings it all back together in a beautiful, majestic way… in the spirit of Channthy and the CSP, it’s shaping up to be the right kind of album for the 6th long-player by The Cambodian Space Project… it continues a vision and an outlook shaped a decade earlier.

So, if you’re in Phnom Penh this weekend or the following, look out for us at Good Times Bar, performing acoustic songs as Sochi, Dara & Julien on Sunday 23 then again, as “Whisky Cambodia” in tribute to Channthy on Sunday 1st of March. If you happen to be in Siem Reap, Dara and I will also perform an acoustic set on Wed 26th – to mark the date of Channthy’s birthday – and again as part of the 5th birthday party at 60 Road Studios on Saturday 29. We’re celebrating life through music, exciting new music made in Cambodia! and looking forward to seeing you all soon.