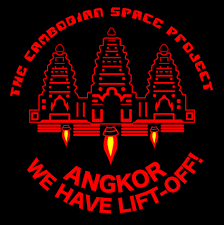 Space Cats, Rats & Other Cosmic Things… just some of the stuff that is beginning to form a super funky new CSP musical.

The Rat Catcher of Angkor Wat is a working title for a music, art and dance piece that The Cambodian Space Project has been mulling over for some time. It will be a new music theatre work, more jungle cabaret than rock opera but based in the kind of rock’n’roll theatre precedents set by The Beatles with Yellow Sub, Bowie’s Ziggy Stardust and the tropes of George Clinton’s P-Funk. It’s also a continuum of Cambodian Space Project musical shows including Galaxy Khmer and Cosmic Cambodia (previously Hanuman Spaceman).

By creating the Rat Catcher, it also means that the CSP band will have the opportunity to record new music and music that could also be a ‘children’s album’ as much as anything, reworking a story based on the Pied Piper of Hamlin.

Perhaps the biggest incentive to get to work on creating The Rat Catcher is an opportunity to work in collaboration with other artists who are already well-established in their own rights, not least Blanck Canvas who are the Melbourne based creators of some phenomenal giant puppets – The Messenger at White Night Festival – and totally awesome prop and set designs. Meeting with creative director Joe Blanck and producer John Barcham earlier this year in Australia has started us on an exciting conversation bringing lots of thoughts and ideas for bringing the Rat Catcher to life. Check out some of their work here… this is a super cool project created with Blanck Canvas working in collaboration with Aussie hip-hop group The Thundamentals.

The Rat Catcher is based on The Pied Piper.

The Pied Piper isn’t one of the best-known or most popular fairy tales. But it’s certainly one of the creepiest. It’s got it all: rats, a mysterious visitor, hypnotized children — what more could you want in a terrifying tale for young listeners? Well, how about the fact that it’s almost certainly (mostly kind of) true?“

The Pied Piper” Poem by Robert Browning
“Rats! / They fought the dogs, and killed the cats, / And bit the babies in the cradles, / And ate the cheeses out of the vats, / And licked the soup from the cook’s own ladles, / Split open the kegs of salted sprats, / Made nests inside men’s Sunday hats, / And even spoiled the women’s chats, / By drowning their speaking / With shrieking and squeaking / In fifty different sharps and flats. . .”

Channthy and I had been dreaming up a CSP national tour and the band had been recording music that was heavily influenced by 70’s Blakspoitation and dance music, including Disco and the Soul Train dance line. We’d been hoping to get a chance to haul a big old Soundsystem around Cambodia to through a kind of dance party with a mix of both live band and live dj and while this was shaping up as a kind of Soul Train Cambodia concept, we also hoped to evolve our own kind of themes and storytelling with a narrative running through the show… the loose idea at the time was to re-work the Pied Piper.

I’d taken time out to paint and sketch ideas back in late 2017 but shelved this work until recently. Over these last few months, I’ve had the time and inclination to return to the Space Project with a look towards future work and the kind of thing that would be, in my mind, the right move forward. Recently, I’ve been meeting with some fabulous artists and companies who love the idea of new works such as The Rat Catcher coming out of the CSP camp and with some of our UK team visiting us here in Cambodia, we’ve even been able to ‘jam out’ the Rat Catcher live during the Kampot Readers & Writers Festival. Kak Channthy helped found and launch KRWF in 2015 and Channthy loved the storytelling aspect of music theatre so with new ideas cooking up, I think we’ll see a return of The Cambodian Space Project – working up a super-cool, sassy way of re-telling the Pied Piper as a funky spin on Space Cats, Rats & Other Cosmic Things…

About THE RAT CATCHER

A cosmic alien being descends from outer space upon the ancient city of Angkor. She brings hope, goodness and funky music to a world infested by a plague of mutant humanoid rats. Space Cat (aka the Rat Catcher) is a sophisticated, slinky cat alien, who, at first, appears to be a most aloof feline and ignores the advances of townsfolk, as she’s already preoccupied with the task of reconnecting to her strange otherworld. Space Cat uses advanced technology to tune into peculiar sounds from somewhere very far away, she is not amused by the curious townsfolk or their earthly distractions in the world in which she has crash-landed. But soon Space Cat is called upon to help rid the town of its rat problem and sets about helping change things. However, not everyone likes this and Space Cat must negotiate passage with the town’s corrupt and greedy officials; she will need to form a band of musicians to enable the channeling of powerful cosmic sounds and thereby release brainwashed minds from the ‘digiphere’ controlled by a small group of omnipotent thought police. As Space Cat’s band begins to play, things start to change through a deliriously intoxicating new music and an overwhelming urge to get up and dance! The rat catcher’s divine power has called upon the lost funk (the Funk was lost at sea by Parliament on 2 July 1979, “the day the funk died”) and townsfolk are freed from all-pervasive darkness riddled by rats. Soon Space Cat’s groovy band (let’s just call them The Kosmatrons) transmits energy that frees the minds of almost all of the enslaved humanoids of ancient Angkor. It’s an overwhelmingly funky experience! Everyone is dancing! It brings harmony, joy, and happiness to the people but not all is as free and easy as it seems – there’s still a price that must be paid.

The CSP’s first foray into music theatre began with a show called Galaxy Khmer, created in collaboration with Belgian avant-garde theatre director Michael Laub. Galaxy Khmer was certainly one of the peaks of Channthy’s own development as a stage performer and she relished the attention Michael gave her natural abilities as well as the opportunity for the Cambodian Space Project band to perform in venues quite different to the gigs and concerts we’d been performing as a rock’n’roll band.

Through the making of the documentary Cambodian Space Project; Not Easy Rock’n’Roll we spent quite a lot of time bringing to life some of the CSP poster art concepts and working this and the ‘space travelin’ character or alter ego of Channthy into animations that would later find their way onto the silver screen. This experience also led the project more towards thinking conceptually about possibilities for ‘rock opera’ or animated videos and films to build on some of the Space Project’s own self-referential mythology, where the forces of psychedelic rock’n’roll, funk, groove, intelligence and sex would battle the forces of boredom, the status quo, oppression, stupidity, frigidity and falsehoods.

In Luke Hunt’s interview with the CSP you will find Channthy and I talking much about future plans and ideas as well as family and the early beginning of the CSP. A carnivalesque musical carousel of individuals stepping on an off the entity that is Cambodian Space Project.