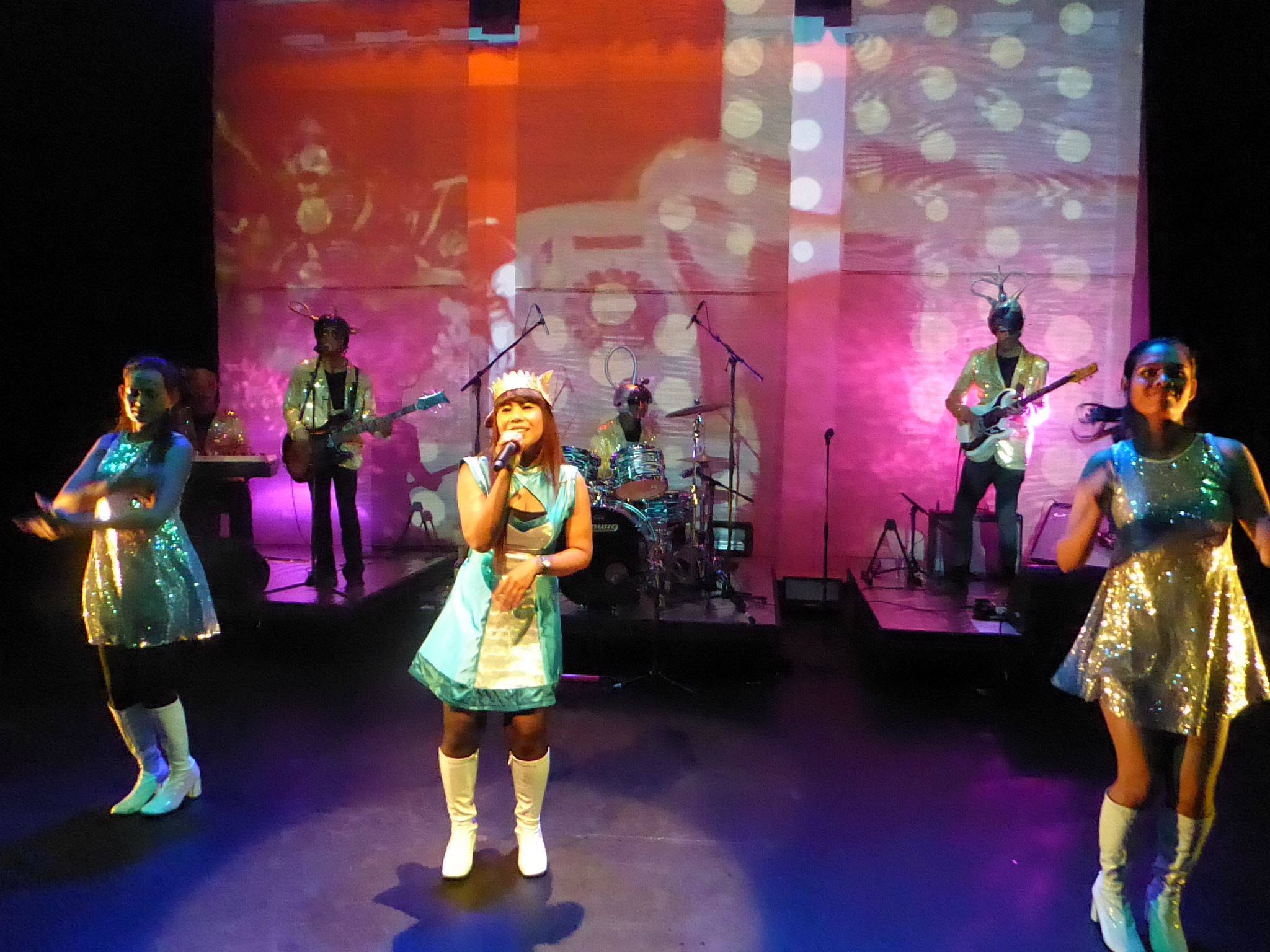 It’s almost a year since Cambodian Space Project last had the buzz of blasting its way across the dusty highways of the Kingdom of Wonder and what a blast! it was.

So here we are, kicking off our eighth year as a Cambodian rock’n’roll band road-trippin’ across Cambodia. Lots of things in Cambodia have changed over this period of time and, while some things still remain the same, such as our own rough’n’ready, DIY approach to touring the boondocks of Cambodia – just hit the road! and do it! things will happen – many other things are evolving in this fast changing place, and, for better or worse, The Cambodian Space Project is rolling with it all. Cambodia shapes and influences our sound and style so much that we’ve become even a small part of the nations own chameleonic story or, at least, a part of the rich new vibrancy that is the contemporary art scene in Cambodia. 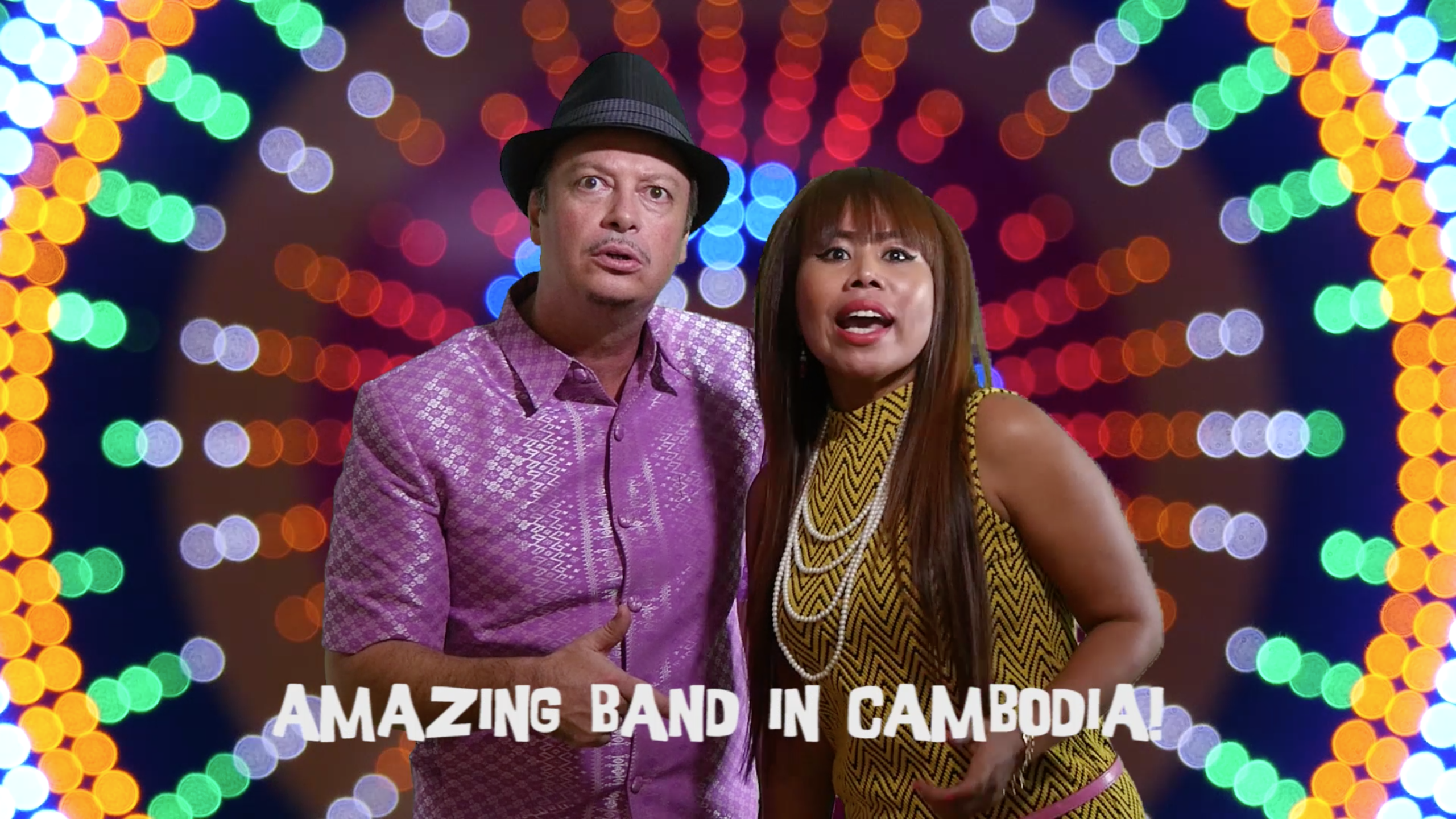 We’ve rocked and rolled through our formative years, riding the thrilling updraft of Cambodia’s revivalist arts, toured much of the world and along the way, called into places such as Detroit where the city’s own incredible cultural ruin-to-revival has had an impact on our music and continues to influence CSP as much as the Cambodian experience shapes our work – heck! we’ve even got two made-in-Detroit albums under our belt – Whisky Cambodia with the legendary Dennis Coffey (The Temptations, Marvin Gaye, Bruce Lee soundtrack, Sixto Rodriguez) and Electric Blue Boogaloo recorded by Jim Diamond (The Sonics, The White Stripes, Andre Williams). In fact, Jim liked the band so much he even came out on tour with CSP in France and more recently to Cambodia where he joined us on last years Motown to Mekong tour and took time to record new music for the bands forthcoming album tentatively titled Lights Out in Wonderland. Along the way we’ve picked up more than a few hitchhikers, the odd stowaway, many wonderful friends, fans and supporters – an abundance of colourful characters and fabulous places to always check back in with – so…  it’s still this force that keeps the CSP fuelled-up, whirring, spinning, rocking and space tripping on an undulating orbit around the planet, and with this next tour ahead of us SPACED-OUT IN WONDERLAND – there’s no better place to call home right now than Planet Cambodia aka The Kingdom of Wonder. Here’s a bit of a wrap on the weird, wonderful and totally-out-there things that are coming up! or at least the stuff that’s showing up on the ship’s radar. 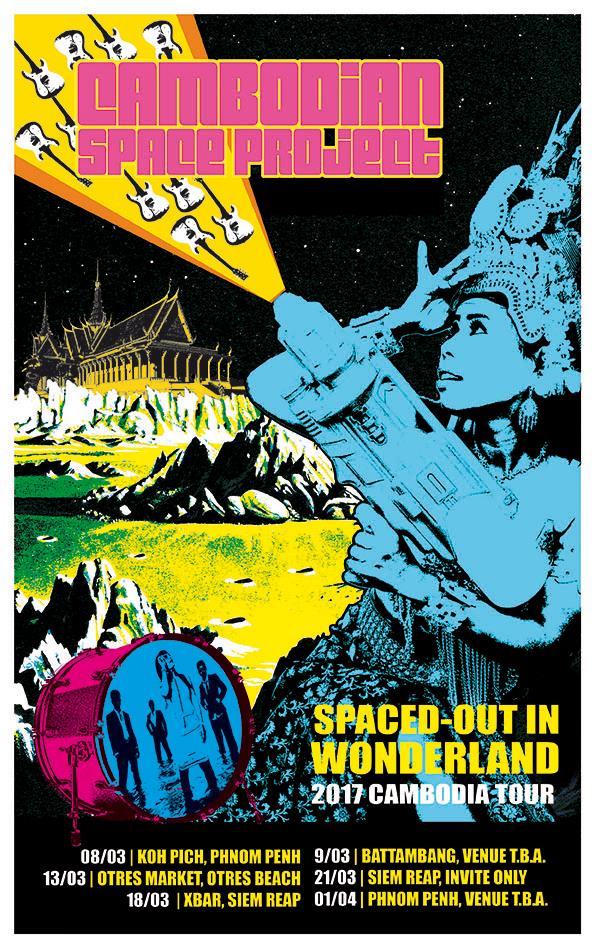 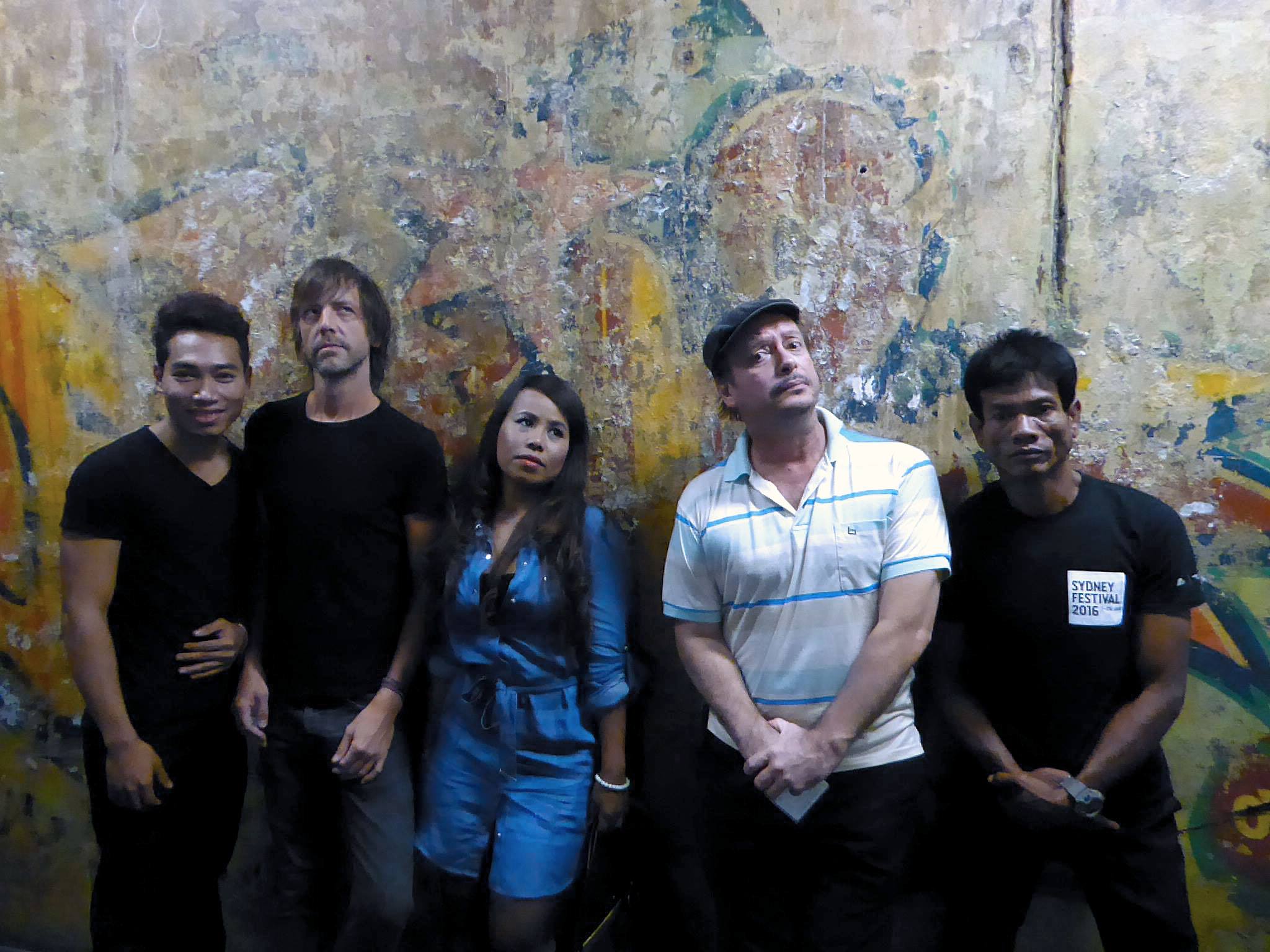 Kicking off our 2017 at CHINESE HOUSE on March 8 – International Women’s Day at Phnom Penh’s. Chinese House is the very same venue CSP launched it’s first release I’m Unsatisfied on 45rpm vinyl back in 2010 and the first occasion for the band to revisit this stunning piece of colonial architectural history and ambience. Don’t miss this official tour launch party 8 – late.

March 9, we’ll be playing the closing party for the Cambodian International Film Festival at Phnom Penh’s classic Chaktomouk Theatre, The CIFF is an event we’ve supported since it’s debut in 2010 and we’ve seen the festival and the film industry in Cambodia go from strength to strength peaking with this year’s World Premier of Angelina Jolie’s First They Killed My Father – the first film of such impact and international reach since David Putnam’s The Killing Fields. Over the year’s we’ve contributed to many of the new films coming of out Cambodia, here’s a few: Ian White’s Before The Fall, Kavich Neang’s Where I Go, and Marc Eberle’s Cambodian Space Project documentary Not Easy Rock’n’Roll.

Somehow, every CSP tour, road trip, cosmic adventure… soon takes on a feeling of ‘hey…. I’m feeling like I’m in a movie’ and nothing is ever as normal or abnormal as it seems. Since forming, CSP has been a collective of individuals getting on and off the bus at various stops but always, like some kind of carnivalesque musical carousel, our musicians and artistic team are always jumping back onboard for another spin each time the occasion comes around. So you see, CSP has never just been a band – a four on the floor Beatles style – it’s a collective of creative energies on and off the stage and last year’s Motown to Mekong tour of KOW was a good example of this – the cosmic space bus also included writer-in-residence Clinton Walker (AC/DC, Bon Scott biographer, Stranded, Buried Country) taking down a few notes for an evolving collaboration – a new CSP road movie based on the bands exploits and adventures. We also had the pleasure of having videographer Samy Nine along for the ride – check out some highlights from Samy’s footage in They Came From Somewhere Else trailer below.

Next stop: The Beach! and yes, any excuse to get to the beach is a good one but when its Otres Market then we’re doubly happy. The Otres Market has become one of the most extraordinary music venues in the region. It’s managed by great people and draws in an equally exceptional if not eclectic mix of amazing people. Needless to say, we love plays shows at Otres Market and this is sure to be one of the highlights of the trip ahead.

X-Bar is another place that we know and love. It’s a rock’n’roll rooftop and is the best place for a shimmy-til-ya-drop boogie in the City of Ruins – Siem Reap. This occasion is also in celebration of X-Bar’s 10th birthday so quite a party is what we’re anticipating.

Another tour highlight is sure to the be inclusion of our favourite new dance troupe – New Artists Cambodia they’re called and yeah, the group’s name ain’t that thrilling but wow! these young women can dance! just check out the video clip of CSP ‘road testing’ new songs with the dancers while recording at 60 Road Studios. Better still, go check out their Facebook page and LIKE ‘EM!
https://www.facebook.com/NewCambodianArtists/ 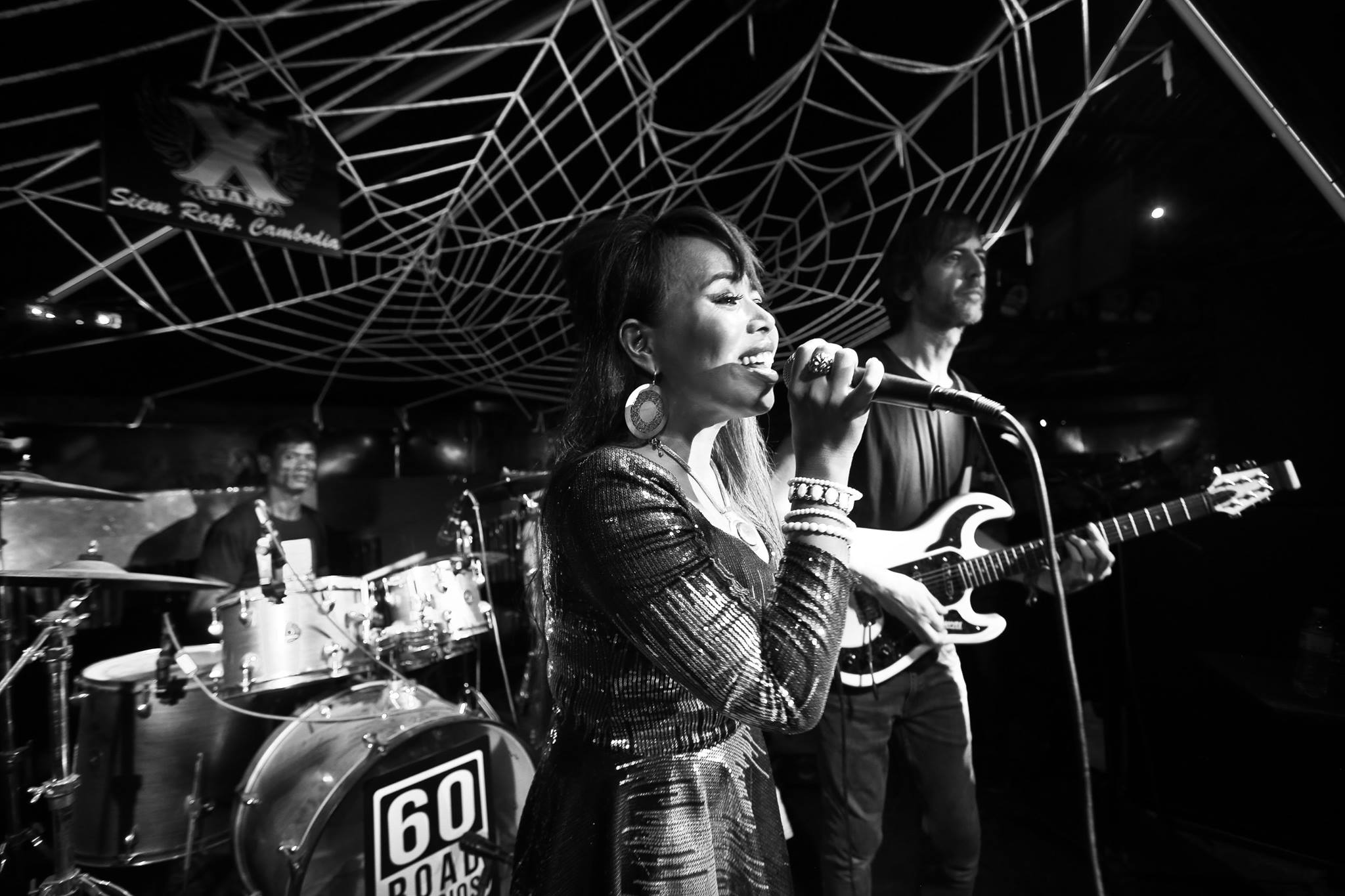 Battambang is a place many of us think of as Cambodia’s arts capital. A great little city with an amazing creative community, not least Phare circus, and other social development organisations such as our friends at Cambodian Children’s Trust – all in all, a community of amazing people doing great things for Cambodia’s development and with a CSP show at the very fabulous Here Be Dragon‘s – what a great place to get together and celebrate all this grooviness.

For the last week in March, we’re back in Siem Reap for few days and it’ll be time to get CSP back into that most excellent place 60 Road Recording Studios – this is where CSP checked in on last year’s tour and where we’re continuing to track and record songs for our forthcoming album. We’ve also got a “private date” in Siem Reap on Tuesday 21… Ooh sounds exciting… this is actually for the filming of a very funny, fun TV program so hopefully, we’ll be able to share more info on this soon. Meanwhile, check out a few songs (see links below) recorded by CSP at 60 Road and shaping up to be part of our official 5th album release.

Finally, last stop in Phnom Penh and it’s looking like this will be an outdoor event (please don’t rain) at Freedom Park on April 1. It’s April Fool’s Day but this ain’t no joke – April 1 will be our launch date for a mind-warpingly-exciting project we’re calling Angkor Pop! it’s something we’ll be sharing lots more news on as the project takes shape and comes together of this year ahead. Essentially, Angkor Pop! is an Iggy Pop tribute album the Cambodian Space Project team is compiling – a dozen or so amazing new artists coming out of Cambodia’s now legendary rock’n’roll scene. Angkor Pop! even has the blessing of Iggy himself who will be going to air with a brand new radio show – Iggy Confidential – pre-recorded for BBC6, on March 31, and we’re told Iggy’s spinning CSP second song in – wow! As the Space Project tour bus makes its way back into Phnom Penh on March 31, we’ll certainly be hands on the dashboard radio, tuning the dials for Iggy Pop FM.

While we’re on the subject of Iggy and Angkor Pop! an unlikely but perfect fusion where Western rock’n’roll culture moves in a kind of seismic shift East… it’s interesting to note that 2017 is the 40th anniversary of Iggy Pop and David Bowie classic albums The Idiot and Lust for Life (an album CSP is attempting to cover track-by-track) but also 2017 marks 50 years since the Stooges first formed – around this time a young Vietnamese woman who called herself “Thu Houng,” meaning “autumn fragrance” became well-known to American GI’s as “Hanoi Hannah” for her propaganda radio broadcasts during the Vietnam War. 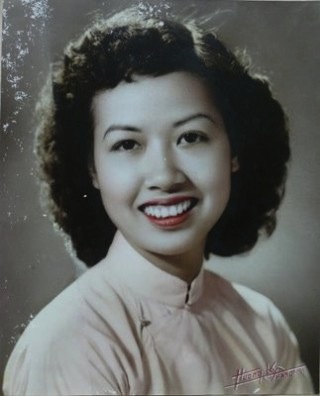 There’s no way to tell if Hanoi Hannah ever spun a Stooges album but the Vietnam War was certainly the first to have a rock n’ roll soundtrack and a lot of music Thu Houng played was, of course, the same rock’n’roll American GI Radio was spinning  – Motown hits, Creedence, Ike and Tina, Bee Gees etc etc. When US marines invaded Vietnam in 1965, the North Vietnamese Army quickly provided American GIs with a female disc jockey through the Voice of Vietnam. The English-language radio service had been running for ten years, since the fall of Hanoi to Ho Chi Minh. Hannah recorded a half-hour show that ran several times a day. Her broadcasts included rock n’ roll records, war news, reports of opposition to the war back home, and lists of dead and captured American GIs. Her silky-smooth voice and rock-n-roll jams made her a hit with soldiers. She got help from anti-war Americans, who provided her with records and recorded messages for the program. The troops tuned in mainly for entertainment, but also because they distrusted the Armed Services Radio and wanted information they knew the US government wouldn’t give them. For example, black soldiers listened with interest to her reports of military intervention in the 1967 riots in Detroit. 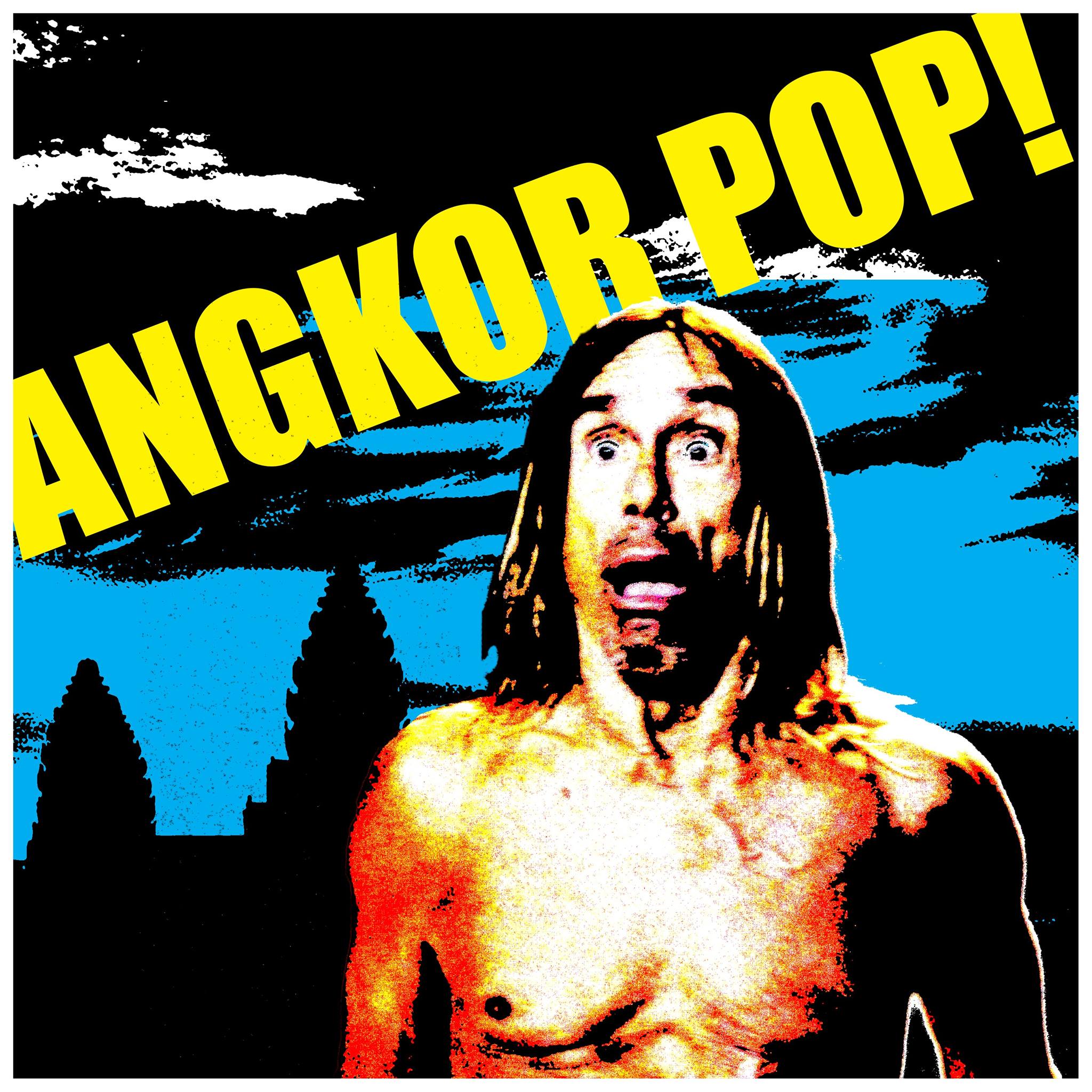 Angkor Pop! is a made-in-Cambodia tribute to the life and times of James Newell Osterberg, Jr., known professionally as Iggy Pop.

Angkor Pop! is an exotic and ambitious compilation project – showcasing the very best of Cambodia’s new wave of East/West fusion groups and present this incredible collection of new talent to the world via vinyl and digital release. Angkor Pop! is a broad and expansive pop art project bringing together musicians, visual artists, sound engineers and producers, videographers and performers. It is an homage that marks several astonishing milestones in rock’n’roll history – the 50th anniversary of The Stooges, the 40th anniversary of the seminal Iggy Pop/David Bowie albums The Idiot and Lust for Life and, not least, the occasion of Iggy Pop’s 70th Birthday!!

“I am totally down with what you want to do, so please consider that a blessing from me.”
– Iggy Pop

One a final note: on the power of radio – here’s an extraordinary photo of Channthy and her father, an army tank driver, it’s a powerful image that really encapsulates Channthy’s life journey and her story as a singer  songwriter. In the photo, both six-gun slingin’ Papa and baby Channthy listen to the radio, a Soviet T53 tank is parked in the background. We’d like to think Channthy and her dad are listening to pre-war psychedelic Cambodian rock’n’roll but it’s quite likely Khmer Rouge cadre radio. This is at a time when Pol Pot had fled Phnom Penh but the Khmer Rouge switched to guerrilla warfare operating from bases deep in the jungle. Around this time Channthy was born into the biggest baby boom in the World’s history and grew up listening to the radio – the love of music sustained Thy through the hard times and it’s her incredible voice and songwriting abilities that make what we do as The Cambodian Space Project all the more meaningful, thrilling, psychedelic and a heck of a lotta fun! 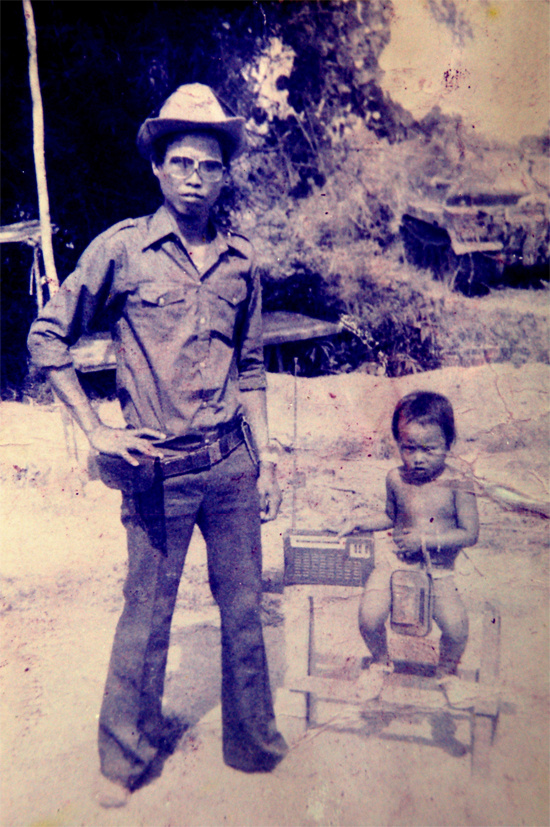