We’ve got the funk! we got the Rat Catcher and we gotta big whiff of durian 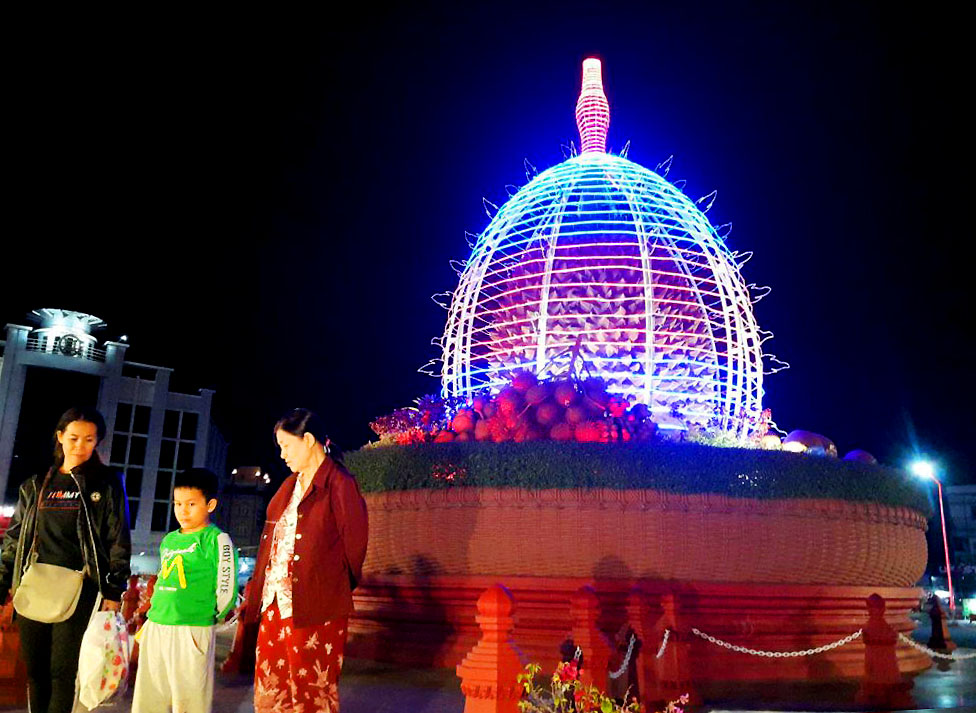 Yep! we’ve got the funk alright… so, according to the unwritten laws of rock’n’roll, it’s usually it’s the bass player, but this time we reckon it’s the actual same funk that George Clinton kicked overboard (the Funk was lost at sea by Parliament on 2 July 1979, “the day the funk died”) and it’s here with us in Cambodia!

In fact, we suspect that ‘the funk’ could actually be locked inside a giant durian, Kampot’s glorified town monument, and that’s pretty darn convenient! considering we’re gonna need to use it, to unlock the funk and bring to the stage something extra special as a Cambodian Space Project music, art & design collaboration with brilliant Melbourne based team A Blanck Canvas.

Personally, I’m thrilled to be kicking off a new year and a new decade from my new home base which is now, living and working from, The Fish Island Community Arts Centre on Trey Koh (Fish Island). It’s here at FICAC where I’m riffing on ideas for the Ratcatcher and bouncing storyline and scenarios back and forth with Joe and the team at Blanck Canvas. So, it’s still early days, but we’re getting down to work on a really exciting…funky… new project – The Rat Catcher of Angkor Wat.

The Rat Catcher is ‘a search for the lost funk’ told through a re-working on medieval European fairytale The Pied Piper of Hamlin. I can’t tell you too much about it just yet because the paint’s still wet-on-the-canvas so to speak but it’s a major new work, large scale immersive theatre, and a great opportunity to bring the creative minds of A Blanck Canvas (Creator designers, Puppeteers, Theatre designers) and The Cambodian Space Project together.

So, The Rat Catcher of Angkor Wat is the working title for new music theatre by CSP and ABC teams, allowing us to continue building upon earlier music theatre work by following on from ideas sketched out and staged with Channthy – her presence is everywhere through this and I believe the show will certainly conjure Channthy’s humor and the way she would tell a story like this – fun, funky and full of joy and happiness!

The CSP’s first foray into music theatre was probably a live music and dance performance to Georges Méliès’ 1902 film Trip To the Moon ( Le Voyage dans la Lune). We did this show at a launch for the Cambodian International Film Festival, it may have been the second year of CIFF. Anyway, it was an exciting experiment and got us thinking and looking out for more ideas like this. Not long after, we were introduced to Belgian director Michael Laub (well known for his avant-garde theatre work) who got on board with the CSP and we jammed out ideas for a show at the Phare Circus site in Battambang. This would become Galaxy Khmer, and would tour to Berlin then Bergen, Norway. A really special time on the CSP journey, especially Channthy’s experience working with Michael.

Channthy and I then scripted out our own ‘trip to the moon’ concept in Hanuman Spaceman and with the help of producer/director team Harley Stumm and Carlos Gomes, brought this story to life as a kitschy, campy, cartoonish ‘life story’ for Channthy, a show which eventually became super-vibing Cosmic Cambodia performed on memorable occasions not least the Spiegeltent at the Sydney Festival.

In thinking back on my own journey with Channthy and, up until this point, with The Cambodian Space Project, I’m astonished by just how much creativity we’d soon found ourselves immersed in, right from the first show where we began the gig as a duo and ended the night with 6-piece band. Channthy and I created a kind of comic language between us that drew upon our own pop-characterisations of each other, and best of all, a very Khmer Aussie cross-polination of humor. I think anyone who travels and experiences real, grassroots Cambodia, will soon find that the locals have a great sense of humour and it’s distinctly Cambodian! to me, this witty sense of playful, irreverent, humour is quite at home with the Australian humor – dry, irreverent and ironic – down-to-earth and a real laugh! Needless to say, a big dose of self-reverential comic goodness has been key to shaping the world of the CSP.

So, when producer John Barcham got in touched and suggested getting together to talk about the potential of bringing CSP ideas to life in partnership with A Blanck Canvas, the first thing that came to mind was that this would be the first and best occasion to really ‘get the band together’ and get down to work on something that has Channthy’s stamp all over it. It’s a continuum of our ideas in Cosmic Cambodia and in The Rat Catcher, it’s a show that jumps back into the CSP songbook and even includes Channthy’s Khmer rewriting of Iggy Pop’s The Passenger (based on a Jim Morrison poem) as well as allowing the CSP band and studio team to create a whole new soundscape of funky, playful, storytelling songs – a music, song & dance show, that will be equally at home in rural Cambodia as it would be playing out at immersive theatre on the streets of New York City.

The Rat Catcher: An Alien Being aka “Space Cat” brings light, hope, and awesomeness through music – inspired by Pied Piper fairytale though it differs in the sense that the townsfolk are given a glimpse into a better world, not removed from the one they’re already in. It’s a play posing a number of questions relating to the nature of destiny and the human condition. Furthermore, the setting is not medieval Europe but is more a cosmic vision of a city based on the vanished civilization of ancient Angkor. Rat Catcher is equally inspired by the kinds of Afropolitan literary tropes you might find in George Clinton’s P-Funk themes and storylines and draws upon philosophical ideas presented in Camus’ La Peste through to socio-political writings of Cameroonian philosopher Achille Mbembe. Rat Catcher is intended as an ‘immersive theatre’ experience – as the audience gets to wear rat masks and walkthrough and “Angkorian style” Hamlin Town and participate in the Rat Society while interacting via show’s App on their own phones.

Getting down to it!

Our Ratcatcher is going to be a slinky female cat character, let’s just call her Space Cat: she’s armed with laser-guided melodies, atomic grooves, devastating rhythms she’s a smoking hot Funkanaut from another planet and has the look of an Angkorian Apsara. Somewhere in The Ratcatcher, you’re gonna find out that Space Cat is actually an agent of Dr. Funkenstein, the mastermind of outer space funk.

First steps of this large-scale work is a matter of visualization and pen-to-paper… Joe’s been putting thoughts and ideas into costumes, characters and a mood board, meanwhile, over here on Fish Island, I’m continuing to paint, write and dream up the Rat Catcher with a playlist of songs pumping through our outdoors sound system. Even our young trainee barista Phim is in on the act and has been playing out “Space Cat” for a few green-screen photo shoots, things that we will look to animate and develop further.

So, the story we’re mulling over…plays out in an imaginary world but hey! it’s really not too far removed from where things are at right now! In the Rat Catcher of Angkor, a cosmic alien being descends from outer space upon the ancient city of Angkor. She brings hope, goodness and funky music to a world infested by a plague of mutant humanoid rats. Space Cat (aka the Rat Catcher) is a sophisticated, slinky cat alien, who, at first, appears to be a most aloof feline and ignores the advances of townsfolk, as she’s already preoccupied with the task of reconnecting to her strange otherworld. Space Cat uses advanced technology to tune into peculiar sounds from somewhere very far away, she is not amused by the curious townsfolk or their earthly distractions in the world in which she has crash-landed. But soon Space Cat is called upon to help rid the town of its rat problem and sets about helping change things. But not everyone likes this and Space Cat must negotiate safe passage with the town’s corrupt and greedy officials; she will need to form a band of musicians to enable the channeling of powerful cosmic sounds and thereby release brainwashed minds from the ‘digiphere’ controlled by a small group of omnipotent thought police. As Space Cat’s band begins to play, things start to change through a deliriously intoxicating new music and an overwhelming urge to get up and dance! The rat catcher’s divine power has called upon the lost funk (the Funk was lost at sea by Parliament on 2 July 1979, “the day the funk died”) and townsfolk are freed from all-pervasive darkness plagued by rats. Soon Space Cat’s groovy band (let’s just call them The Kosmatrons) transmits energy that frees the minds of almost all of the enslaved humanoids of ancient Angkor. It’s an overwhelmingly funky experience! Everyone is dancing! It brings harmony, joy, and happiness to the people but not all is as free and easy as it seems – there’s still a price that must be paid.

Our Rat Catcher reinvents the Pied Piper of Hamlin to draw upon post-Foucauldian debates on biopolitics, war, and race as well as a notion of care as a shared vulnerability – to explore how new conceptions of the human that transcend humanism might come to pass. These new post-humanist conceptions allow us to encounter the Other not as a thing to exclude but as a new beginning and the building of a more just world – enter the Rat Catcher.

Making it happen! from Sunshine to Fish Island

First things first… we gotta find the FUNK! and to do this it’s a lot of jamming, conceptual ideas going on in the studio, sketchbooks and of course, the kind of musical grooves and sounds – a blend of Motown to Mekong or perhaps a Cambodian Soul Train – underscoring the whole thing… I mean… we wanna make you dance and once our Rat Catcher has found the funk! that’s what’s gonna happen! with a bit of lucky, The Cambodian Space Project and A Blanck Canvas will give the Rat Catcher a public airing at the 2020 Sunshine Lantern Festival, Sunday October 4th (my birthday!), then right here on Fish Island (Trey Koh) Cambodia where the Rat Catcher will be a featured event at this year’s Kampot Readers & Writers Festival and performed here at our purpose-built Fish Island Community Arts Centre.

The Ratcatcher is a collaborative artwork-in-progress and here at FICAC we’re open to volunteers, especially creative types who would enjoy living and working in residence with the team at FICAC. If this sounds like you? then drop us an email at kampotarts@gmail.com. For more information on working with the CSP email thecambodianspaceproject@gmail.com.

It’s a long way from Fish Island to Melbourne, Australia but we’re already setting the coordinates… so on full moon night October 4, 2020, look out for the Rat Catcher’s funky durian space pod… she might even be crash-landed somewhere around the busy Sunshine shopping precinct along Hampshire Road at The Sunshine Lantern Festival – it’s a free community event that takes place in , Sunshine annually.  It will be a huge day of family fun, live entertainment, rides, street performers, animals, music, dancing, food of many nations, magical Lion and Dragon Dancing, a Lantern Parade to celebrate the full moon.