Words & Song and other news from The Cambodian Space Project 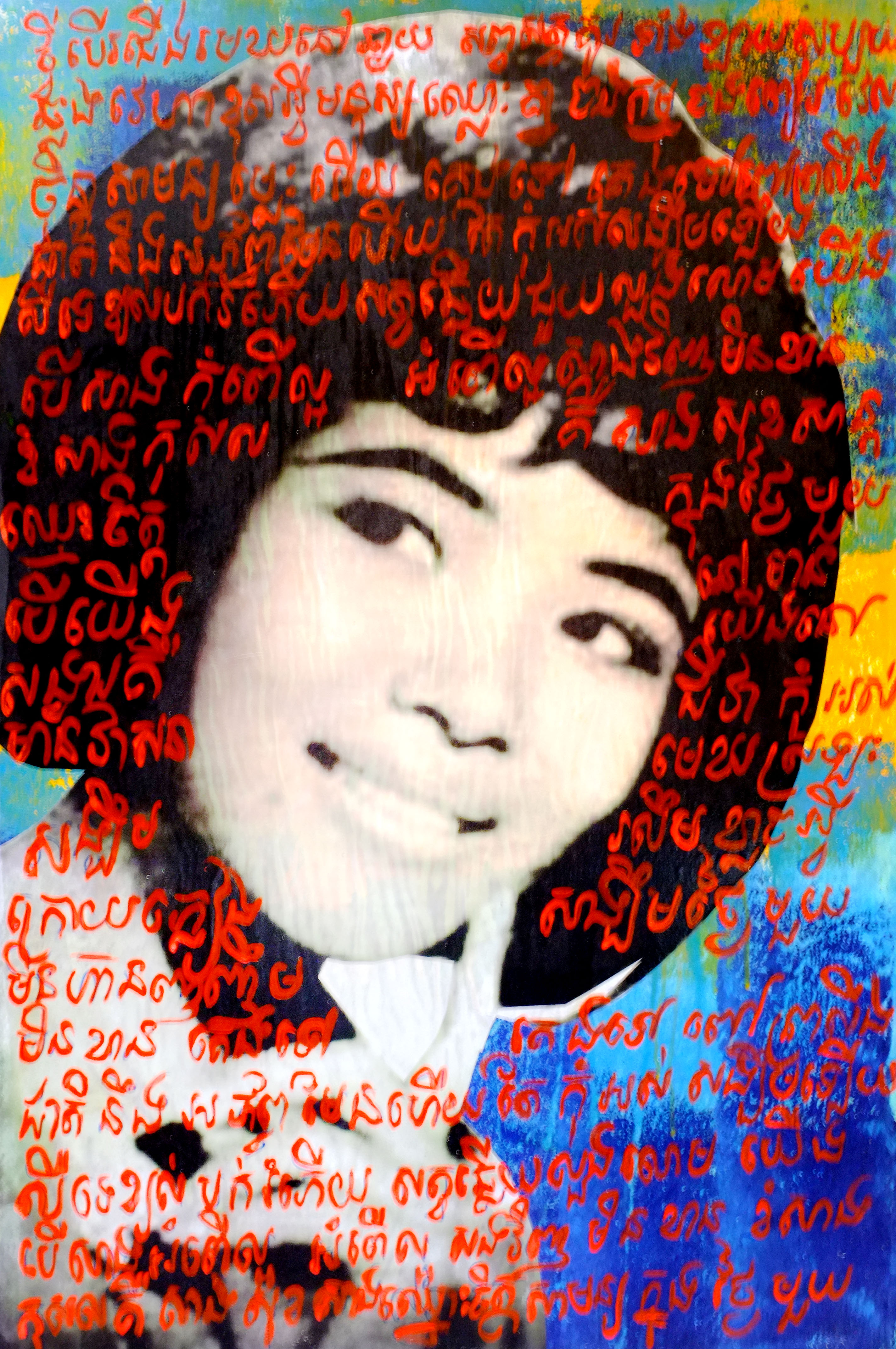 It’s been almost a year since I’ve posted an update on the CSP “Ship’s Log” and I’m well overdue in sharing news or writing more towards my own commitment of writing 100 days of posts in memoriam of Kak Channthy. As CSP friends and fans will already know, the band lost Channthy in a tragic road accident in Phnom Penh on March 20, 2018. Since this time, we’ve all been reeling from this devastating loss and at the same time, getting on with life and all the important things left to do. So, it’s been a while since I’ve written but so much has happened and continues to happen here in Cambodia and in music through the legacy of Channthy.

Not long after Thy passed away, CSP’s inimitable drummer Bong Sak approached with an idea, that the band should continue on and perhaps the best way to keep going would be to perform the next show (rather than cancel an already confirmed date at the French Embassy) with his own daughter Samnang stepping in. Of course, we’d all been wondering what would be next – I received many messages from friends and people I hadn’t met about this too – but really, I already knew we’d be carrying on, somehow the CSP would ‘keep going’ – another fave expression of Channthy – and that this is exactly what Channthy would have wanted, for CSP to ‘keep going’ and to build on the incredible gift her life has given us, all the more reason to do this as well as possible and to start with someone already in the family and that’s been Samnang or Nang Ye-ye as per her stage name.

But something else has happened over this last year… Cambodia herself is changing, almost unrecognizable to the time CSP first formed back on the banks of the Tonle Sap around December 2009. In ten years the country has developed at a rapid pace and while this is mostly for the better there’s also a lot of things getting left behind, and to me, part of this is the devaluing and the restricting of free expression and the individualistic of thinking that any good artist needs to truly create work and ideas that are free and original. Channthy was certainly a free-thinking original and you can easily hear this in all of her songs and recordings but she also drew upon the sounds and echoes of an earlier time, a time when artists such as Cambodian chanteuse Pan Ron filled the airwaves with an undeniably vibrant and original style – the kind of free expression that later became a target of the genocidal Khmer Rouge Regime.

It’s been said that Pan Ron’s onstage dancing and flirtatious lyrics, though hugely popular, were also considered scandalous in Cambodia at the time. Translated titles of her songs indicate her risqué focus on romance and sexuality (for example, “I’m Unsatisfied” and “I Want to Be Your Lover”) and a rejection of traditional courtship (for example, “It’s Too Late Old Man”). Near the end of her music career Pen Ran was still an unmarried career woman in her early thirties, which was also unusual for Cambodia at the time. She addressed this topic in the song “I’m 31” which was an answer to Ros Serey Sothea’s hit song “I’m 16.” Pan Ron, was murdered during the Khmer Rouge years but her voice and legend has survived the oppressive regime that killed nearly all the artists of Cambodia’s Golden Era, and lives on to inspire and inform others, not least Channthy, whom some viewed as a reincarnation of Pan Ron.

It’s this kind of history and legacy left behind by the great voices of Cambodia that has motivated all of us aboard the Cambodian Space Project to carry on and it’s also kept us very busy with new work here in Cambodia. Around January this year, I began working on ideas to bring a number of female singers to the stage with the CSP as “The Mothership” – we’d have new-comers perform alongside Nang Ye-Ye and the band as tribute and as a way to continue to do some good with the legacy Channthy’s left the world. So, I put a call out and one of the first people to respond was Sam Dara who told me she thought the idea of tribute concert was ‘just so inspiring’, just what I wanted to hear of course, but also told me she’d never known of Channthy until she overheard, from her apartment nearby the Foreign Correspondent’s Club, the first memorial concert held in April 2018. Dara and I teamed up and have since worked together to stage “Cambodian Women of Song” first at Phnom Penh’s Institut Francais for Fete de Musique in June and more recently, out in farmland Cambodia on Koh Trey as the highlight event of this year’s Kampot Readers & Writers Festival.

Both events have proved thrilling and inspirational but have also set the stage for looking further into the incredible story, a HER story, of the siren singers of Cambodia and to also look to the future as The Cambodian Space Project, with a view to take things even further, to respectfully create a ‘music revue’ as The Cambodian Women of Song backed by house band The Cambodian Space Project and that’s precisely what’s me and all involved, so busy this last year. Thankfully, it’s something that’s kept me motivated and spiritualized and moving towards some really exciting new work with The Cambodian Space Project. It’s something I feel that the soul mate I lost in life, is very much with us in spirit and this gives me the strength and belief that taking The Cambodian Space Project to new places artistly, is a good thing! Channthy, having strong Buddhist belief in such matters, used to carry close to her, several of her mother’s teeth recovered after her body had been cremated, in a necklace of Buddha pendants made from gold and believed her mother would be there on stage for every performance. One time, our fill in bassist Hollie Lewis, had just stepped on stage at a concert at a venue called Scene Ella Fitzgerald, Hollie had been nervous about our lack of time to rehearse (or even sleep) and to make things worse, her set list blew away in the wind! with no time to run off stage and find her notes, Hollie told Thy she was worried!! Channthy unlatched her necklace and told Hollie to carry it in her pocket… “My mum’s teeth, don’t worry Hollie, this will bring good luck! We’ll be okay”. And it was okay, a great fun concert at a wonderful place and Channthy wooed the big crowd with all her charm and magic!

So, as the end of the decade approached and another begins, I’m looking into the future and hoping that this will be full of wonderful music, not least new music from the women of Cambodian Women of Song and the band, my band The Cambodian Space Project. I can’t wait to see where things go next. Back in 2009, when I first saw some video playback of Channthy jamming with a loose formation first assembled early December ’09 and then jamming on a boat, I told Channthy who was watching over my shoulder, that things would change, this band would probably take us places, we’d meet many new and different people along the way and life would change – and it has.

The most exciting thing I’ve been involved in this last year is to encourage and to work with new and emerging singers to write, to express themselves through their own voices and ideas and to be a part of a vibrant creative community, especially through Cambodian Women of Song and the power of music to reach out and to connect people ! this has been hugely fun and rewarding and I’m pleased to see some of the results already coming to light, not least the original new releases from Sochi, Sam Dara and Nang Ye-Ye with the CSP Mothership. Listen out in 2020, I’ll be posting updates on FB and spinning some of the new recordings on the Asian Garage Underground in a new series being produced for Kampot Radio.

There are already some really special things on the horizon but I’ll keep that news for next time. Until then I’m writing to thank all of our supporters and those who’ve kept this wonderful band working on beautiful new things, not least the Cambodian Women of Song and the way this has been so kind and respectful to the incredible legacy of Kak Channthy.

p.s. a big shout-out to all who supported Garage Fest! and, in turn, the staging of Cambodian Women of Song at KRWF, without your help it would not have been possible to bring it all together! Awkum thom thom.
https://www.facebook.com/donate/1271910192971038/